For the record, I’m not the regular Report Card marker for Steel Curtain Rising, so its really not my place to suggest that Jesse James and Vance McDonald get “A” for their efforts in the Steelers win over the Ravens.

But, the position, particularly Jesse James and Vance McDonald, certainly deserved to win the Steelers Report Card’s Unsung Hero Award as they did during the Steelers AFC North Clinching win over the Ravens for playing a much-bigger part of the game-plan than anyone could have possibly envisioned. 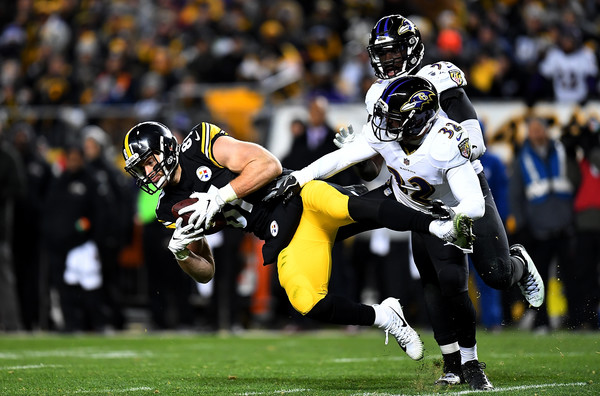 With JuJu Smith-Schuster sidelined while serving a very-controversial one-game suspension for his block on Bengals linebacker Vontaze Burfict last week, and with Martavis Bryant continuing to baffle with his inability to get open–this despite Antonio Brown drawing constant double-teams–one wondered who would pick up the slack in the Steelers air-attack.

Speaking of Vance McDonald, he’s sort of been this year’s version of Ladarius Green, who was an athletically gifted tight end the Steelers signed as a free agent prior to the 2016 campaign, but, thanks to concussion-related problems, only played in a handful of games in his lone season in Pittsburgh.

Vance McDonald may not have come to Pittsburgh with the same physical gifts as Green, but when the Steelers acquired him in a trade with the 49ers this past summer, he certainly possessed the size, speed and athleticism Pittsburgh had been searching for at the tight end position for many years.

But, before Vance McDonald exited the game, he tallied four receptions for 52 yards. This might not seem like much, but considering Eli Rogers and Bryant combined for a mere 66 receiving yards, Vance McDonald’s contribution as welcome as it was necessary.

Speaking of contributions, what about the night Jesse James had for the Steelers on Sunday?

James may have even come up with the night’s most-crucial reception.

If Pittsburgh didn’t pick up at least a good chunk of yardage on the play, the game would most-likely be over.

However, quarterback Ben Roethlisberger found James 16 yards downfield, and the tight end managed to hold on to the pass in traffic, which laid the groundwork for what would become the game-winning field goal drive.

But, in a nip-and-tuck, prime-time affair with the AFC North title on-the-line, the Pittsburgh Steelers certainly needed everything Jesse James and Vance McDonald could give them, Sunday night.

And their contributions should not go unnoticed.