In a move that has been anticipated for at least two years, Pittsburgh Steelers wide receivers coach Richard Mann has announced his retirement. And while Richard Mann might not have the profile of other position coaches, make no mistake about it, his presence will be missed. 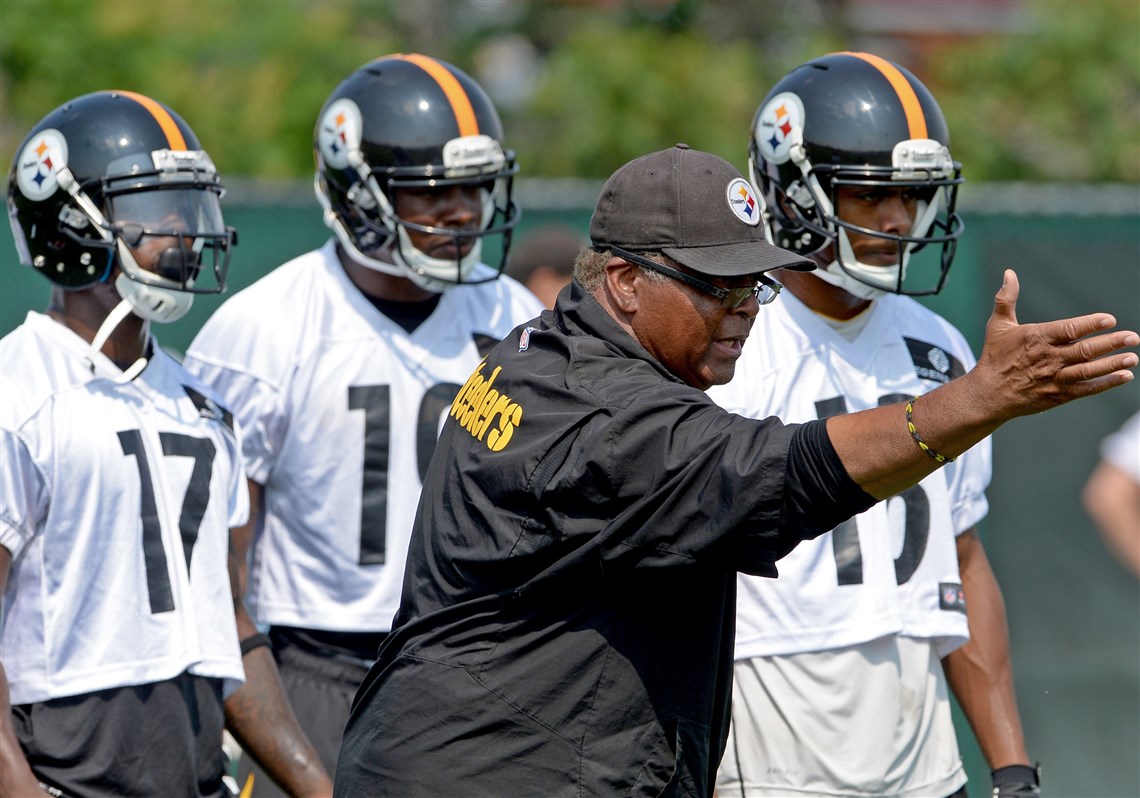 Go back to 2012 and the days when “Young Money” aka Mike Wallace, Emmanuel Sanders and Antonio Brown were all the rage in Steelers Nation.

While the Steelers offense had a fairly strong start to 2012, the unit fell off the rails during the second half of the season. While an injury to Ben Roethlisberger took its toll, the value of “Young Money” was measured in pennies rather than dollars. The whole was less than the sum of its parts.

As The Watch Tower detailed at the time, the Pittsburgh Post-Gazette issued dueling stories by Ed Bouchette and Gerry Dulac offering starkly contrasting interpretations of events. Dulac’s story suggested the move was Montgomery’s and one made only with great reluctance. Bouchette’s suggested Tomlin had pushed Montgomery out, and reported that, absent Hines Ward, chaos had enveloped wide receivers room.

That’s all one blogger needs to accept Ed Bouchette’s interpretation of what transpired in 2012. The Steelers don’t allow assistant coaches much contact with the media, but when Richard Mann spoke about 3rd round pick Markus Wheaton during the 2013 NFL Draft, the man positively exuded an aura of “Been there, done that.”

Mann also coached with the New York Jets, Washington Redskins, and Tampa Bay Buccaneers where he first met Mike Tomlin, and the two forged a bond evident in the words the Steelers head coached used to praise Mann upon his retirement:

I had the pleasure of working with him 15 years ago at a different capacity. My appreciation for him really kind of started there. I was a younger assistant position coach, defensive backs. He was a more senior veteran wide receiver coach. Obviously, by the nature of the positions, we worked cooperatively together in training camp. I learned a lot from watching him coach his guys on the grass and off the grass. I was appreciative of him allowing me to do that. Often times in training camp like settings, we would watch the same video of our guys together. I could hear him make coaching points to his guys about what was happening on the video. He could hear me make coaching points with my guys about what was happening on the same video. It was just a unique learning environment

He’s always been a teacher and not resistant to sharing that expertise with others and that is why I’ve always gravitated towards him. Very accomplished coach. Maybe a lot of opportunities were not afforded to him because of the generation in which he rose through the ranks. I’m cognizant of that. I am appreciative of that. I realize some of the opportunities I have been afforded in my career is because of efforts and accomplishments of men like Richard Mann. I am appreciative on a lot of levels. Probably can’t eloquently describe that level of appreciation, but he is a special man and a special coach. One that has impacted me in a lot of ways.

Richard Mann made an immediate impact when he joined the Steelers staff. People forget, but Antonio Brown’s play dropped off late in the season to the point where their were wispers about whether the Steelers had erred in giving him a long-term deal.

No one says that anymore.

Mann of course, has had a role in mentoring players such as Martavis Bryant and JuJu Smith-Schuster. He will be missed.

Former Steelers wide receiver Hines Ward is a candidate to replace Richard Mann. Ward has coached with the Steelers during training camp, and returned for a few stints during the regular season, and was present on the sideline during a number of games.

Former players returning as assistants always arrive with a sentimental cheer and such was the case each time Jerry Olsavsky, Carnell Lake and Joey Porter joined Mike Tomlin’s staff. And so it was with Joe Greene’s return to Chuck Noll’s staff in 1987 and Mike Mularkey’s return to Bill Cowher’s staff in 1996 (well maybe not on Mularkey.)

If you don’t remember Gerald Williams, you’ve certainly heard his name, right? Well, you probably haven’t. Gerald Williams was a good player, but not a great player for the Steelers. True, Greene didn’t have a lot to work with (remember Donald Evans and Kenny Davidson, no? you’re lucky then) but he reportedly did lobby hard for the Steelers to pick Aaron Jones, who never amount to much more than a marginal starter.

Its perhaps a little harsh to judge position coaches by the development of their players – remember, Chuck Noll’s “Don’t over coach the kid” admonition to Dick Hoak about Franco Harris. But if William Gay and Keenan Lewis did improve under Carnell Lake, Cortez Allen and Shamarko Thomas were clearly mistakes.

Dupree, after an OK start to the season, disappeared from the pass rush down the stretch, although were assured that he was “going into coverage a lot and doing well against the run.” Fair enough, but let’s remind everyone that “they” said the same thing about Jarvis Jones up until the day Mike Tomlin benched Jones in favor of Harrison.

Perhaps Hines Ward will serve as an exception, but thus far no other team is breaking down the door to offer Lake, Olsavsky or Porter opportunities to climb the coaching ladder.

So word to the wise about welcoming Hines Ward back.