Every NFL personnel decision carries its own pro’s and con’s, and each choice a team makes comes with its own opportunity costs, especially in the salary cap era.

In fact, it’s entirely possible that the Pittsburgh Steelers have never faced a bigger, more consequential free agent decision than one that the now face with Le’Veon Bell. What will the Steelers do? What should they do? How will Bell react if the Steelers try to franchise him? Let’s take a look. 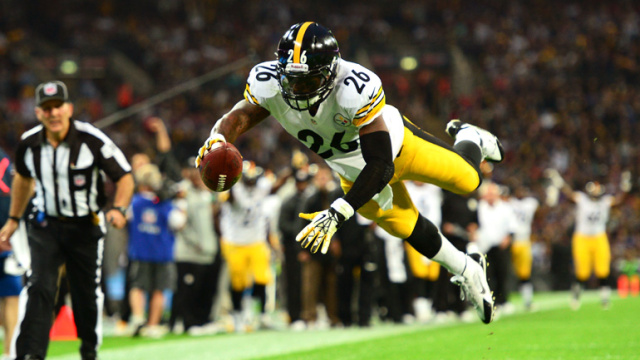 Have the Steelers made a more ballyhood second round pick? Merril Hoge anointed Le’Veon Bell the best running back the draft as soon as Pittsburgh picked him. Later, Ed Bouchette labeled Le’Veon Bell’s first preseason game as “one of the most-anticipated debuts by a Steelers rookie running back since Franco Harris took his first bows 41 years ago.”

To keep that in context, Bouchette had watched the preseason debuts of Steelers first round running backs Greg Hawthorne, Walter Abercrombie, Tim Worley and Rashard Mendenhall. This was hardly his first rodeo with a highly hyped rookie. Yet, Bouchette seemed to be going a little too far over the top.

What’s all the more amazing even if this is true, it has NOT been all smooth sailing since then.

Le’Veon Bell suffered a lisfranc injury in the summer of 2013. Injuries kept Le’Veon Bell from 2014 post-season. Both 2015 and 2016 began with substance abuse suspensions, and he missed most of the rest of 2015 with another injury.

In 2017 Le’Veon Bell logged his first injury and suspension free season, and while his production dipped, he clearly remains the NFL’s best running back.

The Case for the Steelers Resigning Le’Veon Bell

The number crunchers can make all of the arguments that they want about running backs, their declining productivity and lack of durability, but all of those meta statistics, while valid to a certain extent, miss a fundamental point:

This is a man who broke the Steelers regular season in 2016 and then a few weeks later broke the post-season record in his first playoff experience, accomplishing something that John Henry Johnson, Franco Harris or Jerome Bettis, Steelers 3 Hall of Fame running backs, never did.

Player like this do not come along often. When you find one, you keep him.

The Case Against the Steelers Resigning Le’Veon Bell

By all accounts, the Steelers gave Le’Veon Bell an offer that would have paid him considerably more than the next highest paid running back and guaranteed close to 30 to 32 million dollars over its first 3 years.

Art Rooney II wants Le’Veon Bell to retire as a Steeler, but would he really go so far as to sweeten the pot beyond what the Steelers were offering a year ago? That’s simply not sound football sense.

The Steelers could franchise Le’Veon Bell again, but that would wreak havoc with their salary cap, and there’s a real risk that Bell might sit out the season, acting as a martyr for his fellow running backs.

While James Conner isn’t, and shouldn’t be considered as a replacement, the Steelers could likely replace Bell with some combination of Conners, Stevan Ridley, a moderately priced free agent and a draft pick.

This is a tough call because the Steelers are to some degree into uncharted territory. Rightly or wrongly, fairly or unfairly franchise running backs appear to be a thing of the past in the NFL. This site has suggested that Le’Veon Bell might change that, and Bell demands he be paid like a franchise running back.

Even if that’s true, Le’Veon Bell remains a championship caliber player by any measure. The types of plays he delivers game-in and game-out, are not the type of plays you can simply make up with a “Moneyball” type approach to building your running backs depth chart. The tweet below offers only one example of that:

Franching Le’Veon Bell for another year might a wise option in the abstract, but that would complicate the already tight salary cap position the Steelers already face.

One way or another, it seems like Le’Veon Bell will be with the Pittsburgh Steelers in 2018, but this is one time when yours truly doesn’t envy the decision that Kevin Colbert and Mike Tomlin have to make.