Even if we admit that Steelers Nation is spoiled (we are) the fact is Steelers fans have had a rough 61 days. But yesterday the news out of the University of Pittsburgh Medical Center gave every Black and Gold bleeding Steelers fan something to smile about.

As they say, a picture is worth a thousand words, so: 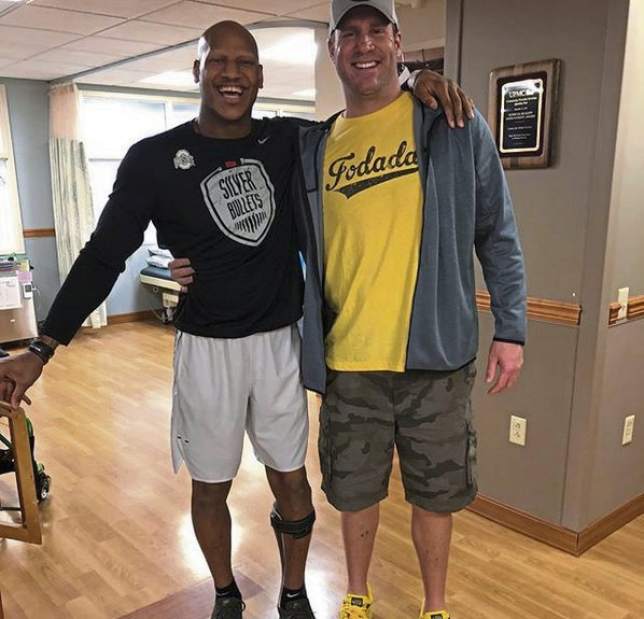 The sight of Ryan Shazier standing alongside Ben Roethlisberger is a sight for sore eyes. It was just 61 days ago that we watched Ryan Shazier made a seemingly routine tackle against the Cincinnati Bengals only to roll over pointing at his back.

Yet, the inside linebacker has been in a wheelchair in every image relased since then. Until now. Shazier has some sort of brace on his leg, it looks like he’s holding onto something for balance with his right hand and his wheel chair, which he used to leave the hospital, is visible in the background.

And, the image of Ryan Shazier standing upright offers an important lesson for everyone in Steelers Nation:

Complain about Jesse James touchdown/non-touchdown vs the Patriots. Gripe about the spectacle of the Steelers cutting James Harrison, then watching James Harrison sign with the Patriots and help them get to the Super Bowl. Moan about Le’Veon Bell‘s contract talk and his tardiness. Whine about Pittsburgh’s piss poor performance against the Jaguars. Ridicule Randy Fichtner’s reverses to Antonio Brown in the Pro Bowl….

Steelers fans might think they’ve had to “endure” a lot, they might argue that taking Mike Tomlin to task without insisting that Art Rooney II fire him amounts to hollow criticism, but let’s be honest folks, no one in Steelers Nation has had a tougher stretch in these last 61 days than Ryan Shazier. And its not even close.

Perhaps it should also signal to both the franchise and fan base that its time to put a disappointing end to the 2017 season in the past and firmly focus on 2018.