I don’t know much about the NFL’s salary cap, and chances are, neither do you.

I do know the Steelers need help at both inside linebacker and safety–or at least they did–and I was wondering how they were going to find two competent pieces in free agency.

And if they did that, would they have enough money to pay star running back Le’Veon Bell $14.5 million in 2018 (unless the two sides can reach an agreement, which seems remote at this point). 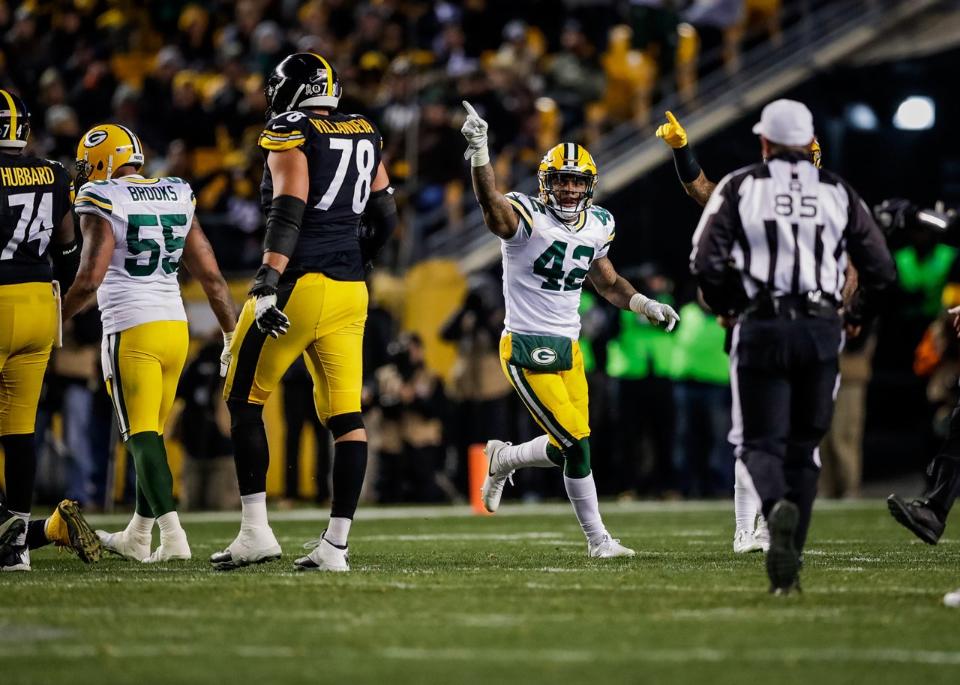 Morgan Burnett late in the Steelers 2017 win over the Packers. Photo Credit: Evan Seigle, via Packers.com

According to several pieces I’ve read as well as the site, spotrac.com, Burnett’s salary will eat up just  under $2.5 million in cap space this season. Considering the Morgan Burnett’s contract is worth a reported $14.3 million over three years, that’s kind of amazing–or at least means the money is back-loaded and will account for over $5 million in cap space in 2020 (the final season of Morgan Burnett’s deal).

Morgan Burnett is a consistent veteran and was one of the best pieces on the Packers’ defense the past several seasons, so much credit has to go to the Steelers for being able to bring him to town.

As for Jon Bostic, considering his contract is for $4 million over two seasons, no extensive research is needed to know he won’t eat up much cap space this year or next.

I do know both Jon Bostic and Morgan Burnett are capable of starting for the Steelers in 2018 and, at least on paper, will make the defense stronger than it was when it was getting manhandled by the Jaguars in 45-42 loss in the divisional round of the playoffs on January 14 at Heinz Field.

They just have to make fans forget how easily the likes of Jacksonville running back Leonard Fournette tore through the defense with ease at Heinz Field in the regular season and then again in the playoffs (don’t look now, but the Jacksonville Jaguars playoff record in Pittsburgh is 2-0).

If Burnett can be a steadying back-end presence in the secondary and that always crucial last line of defense in 2018, he will be an instant upgrade over Mike Mitchell, who all too often wasn’t either of those things in 2017.

Massaging the salary cap is never an easy thing for the Steelers this time of year, but they managed to bring relief to their aching defense, and do so without wrecking the future–or so it would seem.

Maybe Burnett’s $5 million cap hit will hurt the Steelers in 2020. But, then again, maybe quarterback Ben Roethlisberger will be getting on with his life’s work by then (hopefully, with at least one more Super Bowl on his career resume), and the organization will find salary cap relief organically.

I just feel like giving props to the Steelers front office–namely Kevin Colbert, Mike Tomlin and Omar Khan–for finding a way to get the right pieces for its defense (at least on paper) and doing so at a reasonable price.

Not an easy thing, and this is why they make the big bucks.