Oh, sometimes you’ve got to love being a blogger. So just yesterday morning Steel Curtain Rising published a missive on the first week of free agency in Pittsburgh with a lead paragraph that closed, “All Quiet on the South Side Front.” Things had been quite on the acquisition and departure front, and were expected to stay that way….

Terms of Jon Bostic’s contract with the Steelers have not been disclosed, and his agreement with the Steelers contingent on him passing a physical while at Steelers facilities. The latter part is key, as it highlights the risk-reward nature of the move. 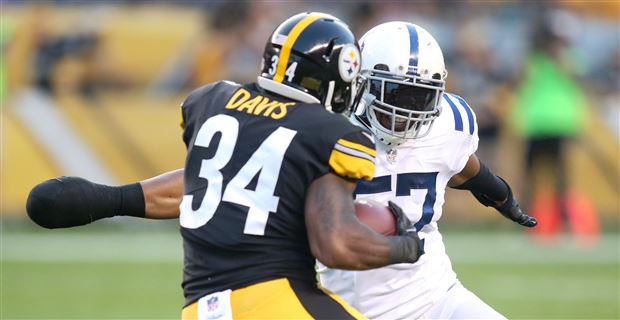 Word is that two years ago when the Steelers acted to sign Ladarius Green on the first day of free agency, they did so without doing their medical due diligence.

If that is indeed true, that Kevin Colbert and Mike Tomlin deserve to earn a big black demerit by their names as Ladarius Green ended up playing 6 games on a 4 year contract due to his concussion history and ankle injuries.

Jon Bostic saw injuries ruin his 2015 season when he was with the New England Patriots. That led the Patriots to trade him to the Detroit Lions in 2016, but Bostic was forced to sit the year out on injured reserve. The Indianapolis Colts signed Bostic in 2017 and he started 14 games before, you guessed it, a knee injured landed him on injured reserve.

It is somewhat ironic that the Steelers would replace an injured player with another player who has a history of chorionic injuries. One has to figure that the Steelers are looking at Jon Bostic as someone to throw into the mix as opposed to someone arriving to be “the answer” at inside linebacker.

Injury issues aside raise the risk to this move, Jon Bostic does look like the typical Steelers under-the radar free agent. Jon Bostic’s  career stat sheet doesn’t hint at hidden superstar ability, but it does show a solid player with some upside.

Steelers blogger Alex Kozora shared a video clip on Twitter that hints some of the update that Jon Bostic offers the Steelers. This is taken from the Steelers 2017 win over the Colts and Jon Bostic is wearing number 57:

Versus the run, Jon Bostic shows good hand use to defeat blocks and the athleticism to string out perimeter runs. #Steelers pic.twitter.com/whiZUVRojN

Notice how Bostic immediately reads the play and closes into the line of scrimmage to set the edge even before Ben Roethlisberger complets the hand off, he avoids getting entangled by David DeCastro and shows excellent lateral movement as he shadows Le’Veon Bell.

Assuming Bostic passes his physical, he immediately bolsters the Steelers inside linebacking corps. At a very minimum he’s a presence who can move in along side Vince Williams to press Tyler Matakevich and would also push any early round draft pick the Steelers would select in the 2018 NFL Draft with an eye towards replacing Ryan Shazier long-term.

The fact that the Steelers have moved to sign Jon Bostic so almost certainly rules out a Lawrence Timmons reunion. Timmons was Mike Tomlin’s first round draft pick, and a reported favorite of the head coach who departed to the Miami Dolphins last spring. Timmons didn’t like it there and even showed up at the Steelers training facility early in the season.

The Steelers aren’t going to spend their meager salary cap space on two inside linebackers. And that also likely means that Sean Spence’s second stint with the Steelers will be his last.