Its time. The NFL’s off season Super Bowl has arrived. The 2018 NFL Draft is upon us. 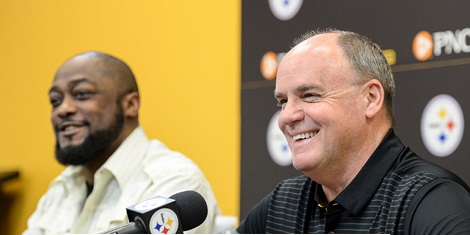 Seriously, after months of everyone and his brother getting to let their inner arm-chair general manager run wild, it is finally time for the people whose opinions count to real decisions, with real consequences for the football field.

Just who the Steelers will take remains a mystery. Some writers, such as Steel City Insider’s Jim Wexell have speculated that the Steelers really do like Milton Rudolph and will take him if available, but both Bob Larbriola and Ed Bouchette feel that is folly. All three men are well-connected with the Steelers brain trust.

There are plenty of dratnics out there blogging, but yours truly is a draft ignoramus. I know it, and I’m not even going to try to fake it. But the NFL Draft is the primary vhiechle the Steelers use to fill needs, and the needs of the Steelers are something we do understand.

Breakdown of the Steelers 2018 Draft Needs

At running back, we’ve rated the Steelers need as “Moderate-High,” because Le’Veon Bell doesn’t look to have a long term future with this team, and James Conners is untested. Site contributor Tony Defeo has rated outside linebacker as “Low-Moderate,” but personally I think the need is Moderate-High, because I have far less confidence in Bud Dupree than others do.

Well, they know a hell of a lot more about NFL inside linebackers than I do.

After that, we’ve rated the Steelers 2018 draft needs at quarterback, cornerback, offensive line, and wide receiver as “Moderate” because the Steelers could use depth now at these positions and/or could need to draft someone today who could start in 2019.

Finally, you have Tight End and Defensive Line as Moderate-Low, as the Steelers are more or less set at these positions, but could use some depth.

So how to sort out this jumble of draft needs? Well, for that we have the Steelers 2018 Draft Needs Matrix. 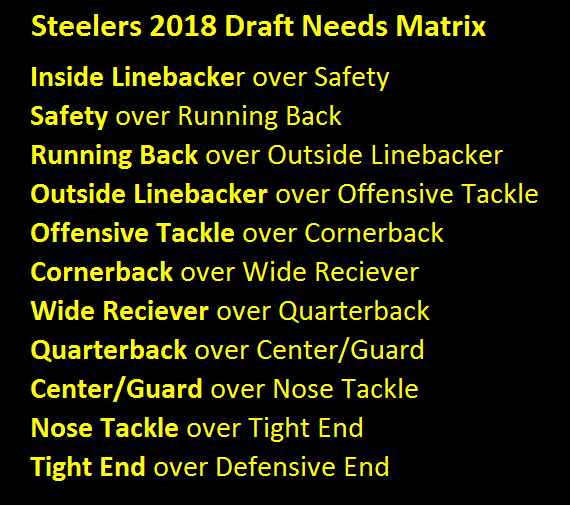 Attentive readers have already noted that our Draft Needs Matrix breaks down needs on the two lines unlike our series on the Steelers 2018 Draft Needs. That’s intentional. While the Steelers needs at defensive line and offensive line are similar enough to analyze them as one group, the Draft Need Matrix is intended to serve as sort of abstract tie-breaking tool should all other things be equal.

When you draft for need, Troy Edwards and Jarvis Jones happen. No, quite to the contrary. The Steelers immediate and long-term needs at inside linebacker and safety are very real. But the acquisitions of Jon Bostic and Morgan Burnett free the Steelers from having to reach for those positions.

As well they should. As mentioned several times before here, the insight linebacker was way, way down in the pecking order on the Steelers 2014 Draft Need Matrix, yet the Steelers Drafted Ryan Shazier anyway, and it was by far the right move. So with that in mind, let’s see how the Pittsburgh Steelers 2018 Draft unfolds.