The 2018 off season has already seen the Pittsburgh Steelers make numerous changes to their roster, and no area has seen more renovations than safety.

Interestingly enough, the two additions have come via free agency, which has been the preferred method of filling this critical spot on the depth chart of Kevin Colbert, the sterling example of Troy Polamalu notwithstanding. Has the free agent market has restocked Steelers sufficiently or should the Steelers target safety in the 2018 NFL Draft? 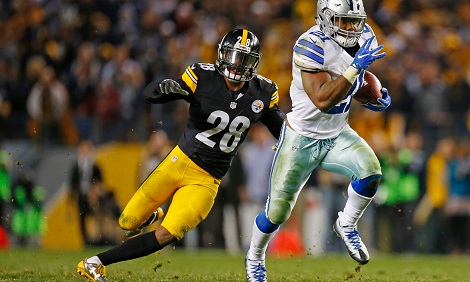 The concept of “starter” at safety has perhaps never been more nebulous in Steelers history. Sean Davis of course will return, but his role may be changing as a shift from strong safety to free safety is being openly discussed.

The Steelers of course drafted Sean Davis in the 2nd round of the 2016 NFL Draft, and Davis became an immediate starter and performed so well that Davis earned Joe Green Great Performance Award aka rookie of the year honors.

If Gerry Dulac’s reporting is any guide, the Steelers view some of the criticism leveled at Sean Davis to be unfair, particularly for the rough outing he suffered at the hands of Tom Brady and Ron Gronkowski in the Steelers loss to the Patriots. Take that for what you will, the Steelers went at great pains to try to defect critism from Jarvis Jones and perhaps are doing the same thing with Bud Dupree.

The Steelers of course signed Morgan Burnett to replace Mike Mitchell, although his role has yet to be defined. Some have suggested he’ll play more of a dime linebacker role, similar to what William Gay played last season.

However, the Steelers are paying Morgan Burnett over 4 million dollars a year which is not the type of contract you give to a situational player. Burnett figures to start in the Steelers secondary, and brings a strong pedigree to the team, including a reputation for being an excellent tackler and strong communicator.

Behind Sean Davis and Morgan Burnett, the Steelers have J.J. Wilcox, Jordan Dangerfield and Nat Berhe.

The Steelers acquired Wilcox via a trade prior to the season, and he saw immediate playing time in the team’s first three games, only to see his participation essentially disappear after that – all but 10 of Wilcox’s 134 defensive snaps came in the first three games of the season.

The Steelers also recently signed Nat Berhe. Berhe is seen as more of a replacement of Robert Golden, who’d led the Steelers special teams for several seasons, but struggled when called into action in the secondary.

As mentioned at the top, Kevin Colbert has historically relied on free agency fill needs at safety more frequently than he has for probably any other position. One of his first moves was to bring in Brett Alexander in the 2000 off season. A year later it was Mike Logan. Further on down the road he looked to Ryan Clark and then Mike Mitchell.

And, his sophomore struggles notwithstanding, Sean Davis the early returns on Sean Davis are positive. Yet Kevin Colbert also used premium picks on Anthony Smith and Shamarko Thomas, two players who can only be described as busts.

There are some positions on a football team where you can “get by,” to a certain extent, but substituting a little quantity for lack of quality. Safety is not one of those. There’s no way to wall paper over things when your safety gets beaten deep, fails to provide a double coverage or takes a wrong angle after a running back has breached the second level.

By signing Morgan Burnett and Nat Berhe the Steelers have wisely insulated themselves from the need of having to reach to fill this position, but that doesn’t change the fact that the Pittsburgh Steelers 2018 draft needs at safety must be considered High-Moderate.