Wide receiver has been a position of strength and talented depth for quite some time for the Steelers, and after injuries significantly hindered the group in 2016, the unit was on the upswing again in 2017, complete with a second-round rookie sensation.

With the 2018 NFL Draft less then two weeks away, how high of a priority is receiver for the Steelers, and should they continue to infuse the corps with high-end talent? 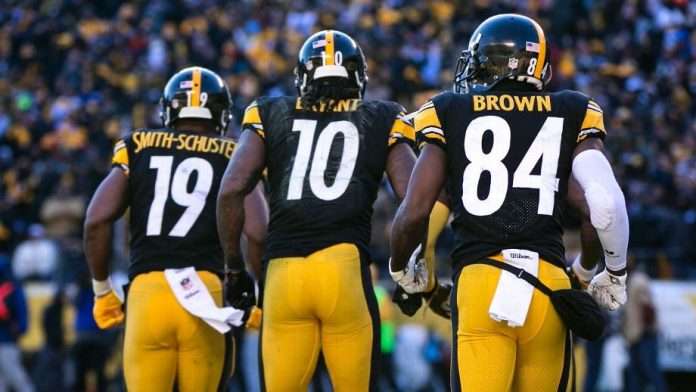 The Steelers obviously have the best receiver in the NFL in Antonio Brown, a man who led the league in receiving yards a year ago with 1,533, this despite missing the final two-plus games of the regular season with a calf injury. Brown eclipsed the 100-receptions mark for a fifth-straight time in 2017 (101) and once again provided many clutch moments, authoring the kind of year that actually had him in the discussions  for league MVP by season’s end.

Pittsburgh may have also found an apprentice great receiver–and current starter alongside Brown–in JuJu Smith-Schuster, a rookie sensation in 2017 who, in addition to taking some of the starch out of the old football guard thanks to his refreshing and entertaining antics, became a much-needed complement to the always double and triple-teamed No. 84 by catching 58 passes for 917 yards and seven touchdowns.

Smith-Schuster also quickly made a name for himself as a tough and ferocious downfield blocker in the mold of the legendary Hines Ward (a talent that will always endear a receiver to Steelers fans), and even proved to be of great value on special teams by returning a kickoff 96 yards for a touchdown against the Browns in Week 17.

Smith-Schuster also provided his share of clutch moments in 2017, including a 97-yard touchdown catch and run vs. the Lions on Sunday Night Football as well as a 69-yard catch and run in the waning moments of the controversial Week 15 game against the Patriots, a play that was essentially wiped out of Steeler lore moments later by the overturning of the Jesse James touchdown which cost Pittsburgh a critical victory.

As I alluded to earlier, Smith-Schuster performed so well from day one, he ascended to the top of the depth chart and was the starter alongside Brown down the stretch and into the playoffs.

Following his one-year absence due to a drug suspension, Martavis Bryant struggled to recapture his form in 2017, as the big plays he was known for during his first two seasons were mostly non-existent. Bryant caught 50 passes for 603 yards and just three touchdowns a year ago, while averaging 12.1 yards per reception.  After beginning the year as the number two receiver, Bryant was dropped behind the rookie Smith-Schuster by mid-season.

Known more for his special teams prowess at this stage of his career, veteran Darrius Heyward-Bey, 31, caught just two passes for 47 yards in 2017.

Blessed with size and speed, there was hope and excitement that having a quarterback the caliber of Ben Roethlisberger would flesh out Hunter’s talents. Unfortunately, due perhaps to not having many opportunities at the crowded and deep position, Hunter caught just four passes for 23 yards a year ago.

On paper, the Steelers certainly have a more than talented receiving corps, with Brown and Smith-Schuster leading the way.

But Martavis Bryant, who was so vocal about his lack of production a season ago, he was deactivated for the Lions game, is a free agent after this season. Outside of Hines Ward and Antonio Brown, the Steelers have little history of giving wide receivers second contracts, so it appears 2018 will be Bryant’s final year in Pittsburgh.

A more pressing concern may be who will play the slot position in 2018, what with Eli Rogers, he of the torn ACL suffered in the playoff loss to the Jaguars, has not yet being re-signed for next season.

While receiver isn’t a position of great need in 2018, it isn’t out of the question that one gets drafted early enough to make people take notice–who saw the JuJu pick coming in Round 2 a year ago?–which makes the 2018 draft need at receiver Moderate.