Wasting little time in filling a need which they had created less than a day before, the Steelers drafted James Washington in the 2nd round, setting the wide receiver out of Oklahoma State as the replacement for Martavis Bryant, whom the Steelers had dealt to Oakland for a 3rd round pick. 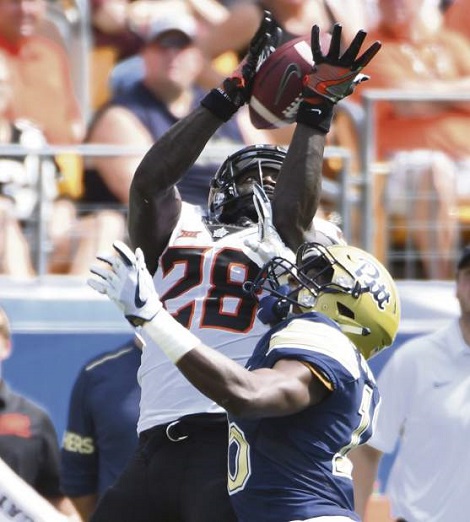 He likes to go down the yard, that’s the kind of need we were looking for, so we’re pretty excited about him. Martavis could run, obviously. But this is what this guy can do too. He runs fast but he’s also powerful, runs through arm bars.

As Ed Bouchette of the Pittsburgh Post-Gazette reports, the Steelers plan to start James Washington alongside Antonio Brown while playing JuJu Smith-Schuster in the slot. Washington described his style of play in these terms:

My strength and being physical with the DB when the ball’s in the air. It comes down to who wants it more and I guarantee I want it more.

If Washington can deliver on that promise, Ben Roethlisberger will be a happy man.

Thanks to the magic of YouTube we have highlight reels of James Washington’s exploits while at Oklahoma: