What do new Steelers defensive line coach Karl Dunbar and new Steelers secondary coach Tom Bradley have in common? They both get to work with players from their respective college coaching perches.

Earlier on day 3 of the 2018 NFL Draft, the Steelers also drafted Marcus Allen of Penn State, the same school where Tom Bradley made his name in the NCAA ranks. 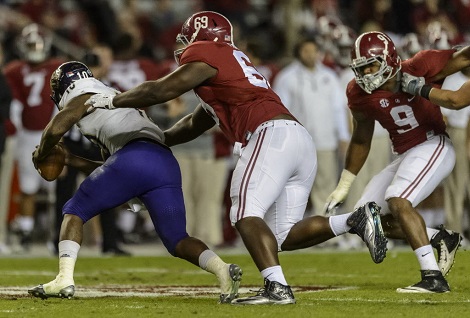 As a 7th round pick for a playoff team, Joshua Frazier was the 246th player drafted, which stands in stark contrast to the man who surpassed him on the depth chart, Da’Ron Payne who went 13th overall after the Washington Redskins called his number.

Outwardly at least, Fraizer wasn’t bitter about things, assuring reporters: “I have no regrets, no regrets. Things worked out the way they did. … I feel like I had some of the same attributes that Payne brought to the table.”

And to be certain, Fraizer’s highlight video supports him:

Steelers defensive line coach Karl Dunbar also shared this on his former and current protégée “It’s the luck of the draw sometimes when you go to a team that has a lot of talent. It’s almost like the Wally Pipp story. He took a day off and never got the job back,” while assuring “He’s a big, strong kid and he can command two blockers.”

As a 7th round pick, Joshua Frazier must make the team in training camp. Cam Heyward, Stephon Tuitt and Javon Hargrave have the starting spots locked up while Tyson Alualu has the number 4 lineman spot secured. That means pits Fraizer against L.T. Walton and Daniel McCullers for what will likely be the 53rd spot on the active roster.