Along with inside linebacker, it was said that safety was one of the primary needs for the Steelers, as the 2018 NFL Draft approached.

And after making Virginia Tech safety Terrell Edmunds their first-round pick, Thursday night, the Steelers continued to address the position with the selection of Penn State safety Marcus Allen in the fifth round on Saturday. 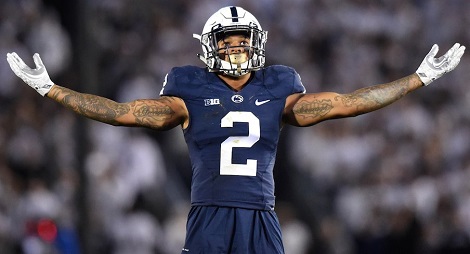 Speaking of his draft profile, it goes on to describe Allen as “a punishing, downhill banger with good size and the attitude of a linebacker in run support.” His highlights profile video certainly supports that:

In four seasons at Happy Valley, Allen collected 320 tackles (only the sixth Nittany Lion to record over 300 tackles in his career), leading the team in that category with 110 in 2016. He also had three sacks but just one interception and 10 passes defensed.

Speaking of 2016, as per his Wikipedia page, it was during that season that Allen cemented his name in Penn State football lore by blocking a field goal that was returned for a touchdown in an upset win over Ohio State.

Allen was thrilled about being drafted by the Steelers, because, as reported by Pennlive.com on Saturday, despite growing up in Maryland, he considers Pittsburgh his hometown.

“I’m coming home. I’m coming home,” said an emotional Allen shortly after learning he would be a Steeler. “That’s why I’m happy.”

“It’s all tears of joy right now….It’s a perfect situation. This is my home. It’s my hometown. My grandmother is from there, my whole family,” said Allen, whose dad is also a Pittsburgh native.

It’s a heart-warming story, for sure, but getting back to the football side of things, there certainly seems to be a common theme for the two safeties the Steelers drafted.

Edmunds was described as a safety capable of playing anywhere in the secondary, even nickel and dime linebacker, and, referring again to his NFL.com draft profile, the Steelers may have similar plans for Allen:

Despite their palpable need to upgrade at the inside linebacker spot heading into the weekend, the Steelers didn’t draft a single player from that position.

But with football becoming more and more specialized, the Steelers seem to have a different plan for inside linebacker (at least in sub packages), and their two newest safeties–including Penn State’s Marcus Allen–may get first crack at executing that plan.