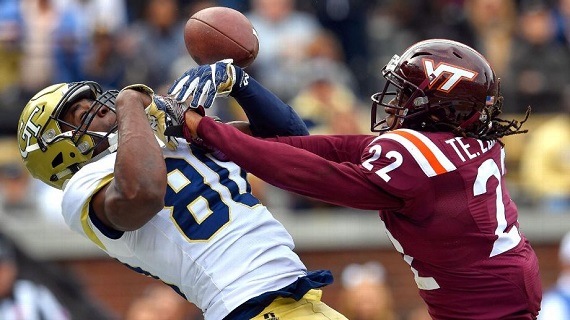 Per Steel City Insider’s Jim Wexell, the Steelers at first attempted to trade down to pick Alabama’s Rashaan Evans, but were blocked.  Wexell didn’t lay down any odds on the Steelers taking Edmunds, by he did lay down 4-1 odds that the Steelers would draft Justin Reid, a safety from Stanford, who Pittsburgh left on the board.

As Kevin Colbert explained, “The previous year head had four interceptions and then last year he had two in 10 games. But last year he was, again, minus the shoulder. He was a really important part of a really good defense.” With that said, Edmunds himself was surprised by the pick admitting: “Honestly, I was surprised,” to be taken in the first round, Edmunds explained “I’m just ready, though. I’m telling you. I’m ready. I was praying and hoping. Now, it’s time to work.”

If nothing else, Edmunds candor is refreshing.

The Harris Highlights video clip touted him as “The Nation’s Most Underrated Safety.” Of course Harris was hired to promote Terrell Edmunds Draft fortunes so you’d expect them to say that. Take a look for yourself:

Terrell Edmunds certainly makes some impressive plays for Virginia Tech on that highlight reel, although some of those passes he is picking off are not going to be thrown by NFL caliber quarterbacks.

A sampling of NFL Draft analysts finds a lot of skepticism being leveled at the Steelers for the pick. Mel Kipper Jr. had Edwards rated as the 8th best safety in the draft. Todd McShay of ESPN thought that Edmunds went too early, and Luke Easterling of the DraftWire labeled the pick as a “head scratcher.”

And there’s nothing wrong with that. Kevin Colbert and Mike Tomlin are wise to keep their own council. While it seems like “only yesterday” 18 years ago a good majority of the talking heads felt that the Steelers HAD to draft Chad Pennington to replace Kordell Stewart. Kevin Colbert and Mike Tomlin took Plaxico Burress instead. Both men had respectable careers, but it was Burress who made game-changing plays in the Super Bowl, albeit not for Pittsburgh.

Still, even from the perspective of self-professed draft ignoramus, there one aspect of the decision to pick Terrell Edmunds appears to be worrisome, and that’s the historical precedent.

In the early 1970’s Chuck Noll, Art Rooney Jr., Bill Nunn, and Dick Haley established the NFL’s diamond standard for drafting excellence. Yes, they hit a grand-slam with the Steelers famous 1974 Draft Class that brought in Hall of Famer’s Lynn Swann, John Stallworth, Jack Lambert and Mike Webster. But even before the 1974 NFL Draft, the quart had already drafted four Hall of Famers in the form of Joe Greene in 1969, Terry Bradshaw in 1970, Jack Ham in 1971 and Franco Harris in 1972. After 1975 or 1976, the quality of the Steelers drafting took a nose dive.

However, one of those reasons, as explained by Art Rooney Jr. in Ruanaidh, was that the Steelers ended up outsmarting themselves, but trying to find players who might have fallen for some reason. And Kevin Colbert’s explanation sounds an awful lot like a similar justification.

He’ll get a shot to start doing that this summer as he competes with newly J.J. Wilcox and Morgan Burnett for playing time while at St. Vincents. Welcome to Steelers Nation Terrell Edmunds.