The overhaul of the Steelers once maligned offensive line might seem like it took place just yesterday, what with the unit currently regarded as one of the best in the NFL, complete with three Pro Bowlers in 2017.

But, believe it or not, the drafting of right guard David DeCastro in the first round of the 2012 NFL Draft–the third of four first or second round picks spent on offensive linemen between 2010-2012–was over a half-decade ago. 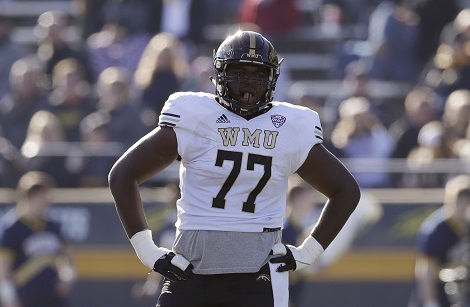 Therefore, it made perfect sense that finding quality depth along the offensive line, a player who could perhaps be groomed to assume a starter’s role in the not so distant future, was high on the Steelers draft wish list heading into the third round, Friday night.

As for his resume, according to his NFL.com draft profile, Okorafor’s family immigrated to the United States from Botswana in 2010. What that means is football was a totally foreign sport to the youngster.

But apparently Okorafor was a quick-study from the start, as he was a highly sought-after high school recruit who ultimately signed with Western Michigan.

Despite his late introduction to American football, Chukwuma Okorafor comes to the NFL as a highly-decorated college player, earning First Team All-Mac honors in both his junior and senior seasons.

His highlight clip would seem to support that notion.

While the Steelers may have drafted Chukwuma Okorafor with an eye towards the future, as alluded to earlier, they are certainly in need of some immediate quality depth after the departure of super-utility lineman Chris Hubbard, who started 10 games in-place of injured/suspended right tackle Marcus Gilbert a year ago, and performed so well, he earned a lucrative free agent deal with the Browns.

Under the tutelage of highly-acclaimed offensive line coach Mike Munchak, Okorafor will have the best in the business teaching him the finer points of his position.

The average age of the Steelers highly-accomplished offensive line will be just under 30 years by the start of the 2018 campaign, and in the world of professional football, it doesn’t take long for a unit to go from a strength to a weakness, with age being one of the biggest culprits.

Therefore, the selection of Chukwuma Okorafor in the third round of the 2018 NFLDraft could prove to be very timely in the long run.