The Pittsburgh Steelers may not draft in their fears, as pointed out in a recent article, but as it pertains to their recent draft classes, they sure do seem to be steering clear of those prospects with character/off-the-field issues (those proverbial “red flags”).

Two years ago, it was Artie Burns, the responsible new father and a surrogate dad to his little brother, following his mom’s untimely death; Sean Davis, the bilingual safety out of Maryland; and Javon Hargrave, the big nose tackle known as The Gravedigger who likes to give back by hosting youth football camps.

Last season, it was T.J. Watt, the outside linebacker out of Wisconsin with a penchant for learning fast and a motor that never stops, the little brother of J.J. Watt, the Texans’ legendary defensive end who raised $37 million last season for the victims of Hurricane Harvey.

JuJu Smith-Schuster, the absolute breath of fresh air of a receiver whose biggest off-the-field issues in 2017 had to do with someone stealing his bicycle and Alejandro Villanueva teaching him how to drive because JuJu came to the NFL without a drivers’ license; James Conner, the University of Pittsburgh running back who battled both a major knee injury and cancer during his college career; and Cam Sutton, the Tennessee cornerback who was known for his intelligence and his ability to be a locker room leader.

Entering the 2018 NFL Draft, one wondered if Pittsburgh would stray from its recent trend of high-character guys by perhaps selecting someone with a more checkered past. 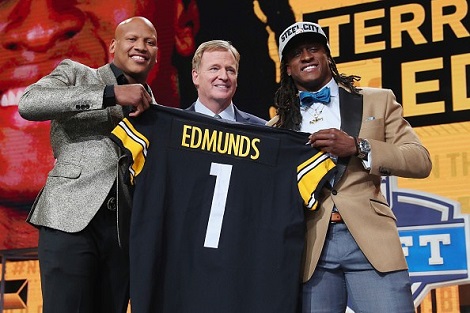 While other, higher-value prospects were still on the board at 28–including LSU running back Derrius Guice who was said to have had some maturity issues and unsubstantiated off-field problems in college–the Steelers selected Virginia Tech safety Terrell Edmunds.

A player labeled as a major reach by the vast-majority of  experts and fans, Edmunds comes from a close-knit family and has two brothers who are also in the NFL–older brother, Trey, who plays for the Saints; and younger brother, Tremaine, who the Bills selected 12 spots ahead of Terrell in the most-recent draft.

You may have scratched your head with the selection of Terrell Edmunds, but as soon as you saw him on stage on draft night, and then touring the Pittsburgh community last week, you just wanted to root for him.

In the second  round, the Steelers selected Oklahoma State receiver James Washington, whose biggest off-field problem at college seemed to be trying to find a peaceful spot to fish.

As for that second third-round pick, Chukwuma Okorafor, the big left tackle from Western Michigan, his worst college attribute seemed to be that he was “too nice.”

Smith-Schuster and Washington don’t have the blazing speed of a Martavis Bryant, the team’s fourth-round pick in the 2014 NFL Draft, but judging by their histories and overall character, it’s highly-unlikely either will face long-term suspensions for violating the league’s substance abuse policy.

And if Smith-Schuster’s rookie season was any indication–58 receptions for 917 yards and seven touchdowns–he could be in-line to be the Steelers next great receiver.

Okorafor may not have quite as much potential as Mike Adams, the team’s 2012 second-round pick out of Ohio State, but he obviously didn’t fail a drug test at the NFL Combine, and he’ll get a chance to develop his skills under  the best offensive line coach around, Mike Munchak.

Perhaps Hargrave wouldn’t be the Steelers starting nose tackle right now (or a Steeler at all) if Alameda Ta’amu, Pittsburgh’s fourth-round pick out of Washington in the 2012 NFL Draft, hadn’t been charged with a felony DUI during his rookie season, after striking several cars with his vehicle while fleeing from police.

James Conner may not have the explosiveness of Chris Rainey, a running back Pittsburgh selected in the fifth round of the 2012 NFL Draft, but he’s currently a Steeler with a chance to make an NFL career for himself, while Rainey, who was released in January of 2013 after he was arrested for battery following a cellphone dispute with a woman, is currently playing in the CFL (come to think of it, 2012 was a bad draft for character guys).

But if they keep focusing on talented football players who are also really great young men, the Steelers reputation could soon become one based in reality.