The 2018 Steelers throwback jersey choice to revive the 1978-1978 jersey with block numbers has electrified Steelers Nation. After all, who could argue? 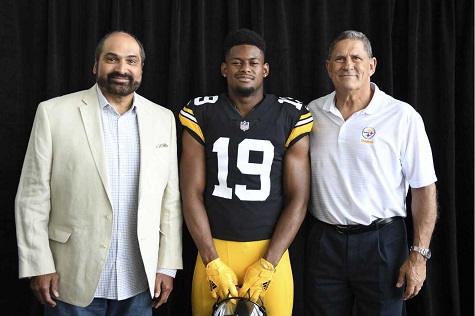 The Steelers changed the block numbering after the 1996 season much to the chagrin of some fans. Honestly, I’m old enough to remember Jerome Bettis and Kordell Stewart modeling the rounded number jerseys and thinking, “That just doesn’t look right.” Some fans still argue that the franchise has never been the same since.

Still, conjuring images of Ben Roethlisberger, Le’Veon Bell, Antonio Brown, T.J. Watt and Cam Heyward decked out in block letters just as Terry Bradshaw, Franco Harris, Lynn Swann, Joe Greene, and Jack Lambert did before them is the perfect recipe for raising the hair on the back of your neck just a little.

And yet, the Steelers 2018 throwback jersey choice efficiently serves another, if less pleasant, purpose….

Why 2018 Steelers Throwback Jersey Choice is Bittersweet for Generation X

…The Steelers 2018 throwback uniforms are also the perfect remedy for making us Generation Xer’s feel old. Yep. If you’re a Fortysomething Steelers fan admit it, when you saw the announcement about going back to block letters, you probably thought, “Gee, that’s not much of a throwback.”

IT can really be that long can it, you demand? Yes, it can. The last time Pittsburgh wore the block jerseys was Fog Bowl II, the 1996 playoff loss to the Patriots, which was Rod Woodson’s final game as a Steeler.

Fans from Generation X have earned a special niche in Steelers history.

Our first memories of the Black and Gold are wrapped in Super Bowl glory. The Immaculate Reception was  established history by the time we were able to fully grasp its spectacular nature. Those of us growing up outside of Pittsburgh enjoyed our grandparents sending down Steelers t-shirts, jackets, hats and gloves which drew envy from everyone else on the playground, because we were the champions!

Our parents had to explain to us, and it took a long time for us believe them, that the Steelers had been terrible when they were our age. Then, just as we were taking the Steelers excellence for granted, the 1980’s arrived, and with it came mediocrity.

Yet we remained faithful. Always feeling, often times feelings fueled by little more than naiveté, that Chuck Noll’s really wasn’t that far from making the Steel Curtain Rise again. The 1987 tease at a playoff run and late season surges in 1986 and even in 1988 seem to legitimatize our optimism.

And now, with the window closing on bringing home Lombardi Number Seven during the Roethlisberger era, we now hope that a return, albeit for one game, to the block letters, will be the talisman the turns the trick.