My first memory of the Steelers Dwight Stone came late in the 1987 season–his rookie year.

The Steelers had just secured a hard-fought 13-9 victory over a very tough Seattle Seahawks‘ team at old Three Rivers Stadium, and Dwight Stone, an undrafted free agent out of Middle Tennessee State, clasped hands with rookie running back Merril Hoge, a 10th-round pick out of Idaho State, as the two celebrated a win that kept their team’s playoff hopes alive.

I remember thinking that that scene of two youngsters and draft long-shots enjoying a victory was very endearing (although, I’m pretty sure I didn’t even know the word endearing even existed as a 15-year old). 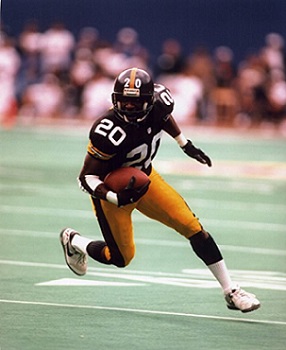 Today, it’s pretty common to read about draft prospects with 4.2 speed, but back when Dwight Stone made his professional football debut as a running back, that kind of 40-yard burst was not nearly as common.

In fact, as per Dwight Stone’s official Wikipedia page, the late, great head coach Chuck Noll said Stone was “the fastest player I’ve ever coached over 40 years. He has BEEP BEEP speed.”

Chuck Noll was referring to the cartoon character, the Road Runner.

However, Dwight Stone did get a lot of work as a kick-returner during his first two seasons. In fact, in a memorable 37-34 last-second Monday Night Football victory over the Oilers at the old Astrodome in Houston–a win that came at the tail-end of a very difficult 5-11 ’88 campaign–Stone returned a kickoff 92 yards for a touchdown.

In 1989, perhaps due to a crowded backfield that included Tim Worley, the Steelers first pick in 1989 NFL Draft, Warren Williams the 1988 Steelers rookie of the year and Merril Hoge, who posted 705 on the ground in ’88 earlier, Dwight Stone and his world-class speed switched positions, as he tried his hand (and feet) at wide receiver.

And it wasn’t just because he wasn’t lucky enough to have Ben Roethlisberger throwing him the ball — On one infamous play in Denver in 1990, Dwight Stone stepped out of bounds during a 90-yard reception that actually would have gone for a score had he been able to keep track of the sideline.

ESPN’s Chris Berman, who loved to create nicknames for players, frequently referred to Stone as “Dwight and the Family Stone,” but in my house, he was often called Dwight “Hands of” Stone thanks to his habit of dropping passes.

Which isn’t to say that Stone didn’t make his share of impact plays. He did, including:

Dwight Stone’s best seasons as a Steeler came during a three-year stretch between 1991-1993, when he caught a combined 107 passes for 1,737 yards and 10 touchdowns, to go along with a combined 241 yards on the ground.

Following the Steelers 1993 season, Bill Cowher and Tom Donahoe determined that neither Jeff Graham nor Dwight Stone were Super Bowl caliber wide receivers. Jeff Graham was allowed to leave as a free agent. The Steelers kept Stone on the roster with the hope of using him as a utility back, similar to roles that Eric Metcalf and Dave Meggett played in Cleveland and New York.

However, Dwight Stone will always hold the distinction the distinction of scoring the last touchdown of Chuck Noll’s coaching career, when he caught a pass from quarterback Bubby Brister and raced 56 yards–a score that would earn The Emperor his final victory, a win over Bill Belichick no less, in his final game after 23 seasons.

Dwight Stone Finishes his Career with Panthers and Jets

Following the 1994 campaign, the Steelers  left Dwight Stone unprotected in the 1995 expansion draft, and the Carolina Panthers took him (along with Gerald Williams and Tim McKyer, for those of you taking notes).

According to a story published on the Panthers official team website in January of 2017, following his retirement from football after the 2000 season, Stone embarked on a career in law enforcement and spent 13 years as a Charlotte-Mecklenburg police officer.

“It was something I always wanted to do,” said Stone courtesy of Panthers.com. “I always wanted to go into law enforcement or the military before I even considered football. It just happened that a country boy from Florala, Alabama, was able to move and accomplish things that God knows I never thought I would see in my life.”

We’ll never know the answer to that, of course, but not many undrafted free agents out of schools like Middle Tennessee State last 14 years in the NFL. For that and for what he accomplished after his playing days, Dwight Stone should feel very proud.