“Back to Basics.” Chuck Noll would be smiling broadly if he’d heard Keith Butler‘s promise that the Steelers would be practicing tackling at St. Vincents during summer of 2018. If Michael MacCambridge’s His Life’s Work is any guide, Chuck Noll uttered “Back to Basics” as much if not more than Mike Tomlin trots out “The Standard is the Standard.” 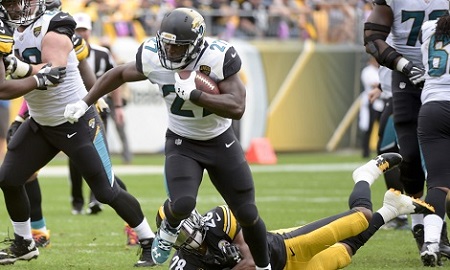 Sean Davis after missing a tackle on Leonard Fournette. Photo Credit: Fred Vuich, AP via USA Today For the Win.

Chuck Noll was complex person – how many other NFL coaches killed time before playoff games by reading books on celestial maritime navigation – but his coaching philosophies were simple. Noll understood that you win championships by excelling at doing ordinary things – blocking, tackling, taking the right angles, etc…

And that’s why Noll would instruct Andy Russell, the only legitimate Pro Bowler he inherited from Bill Austin, how many inches his feet should be apart, and how to hold his hands prior to the snap. Thus, Andy Russell grew from a good player to a great player.

Seriously, if the Steelers fail to bag Lombardi Number Seven in 2018 do you REALLY think its because Ben Roethlisberger and Antonio Brown missed a couple of days of OTAs? Troy Polamalu routinely missed OTAs and he seemed to do just fine.

But Steelers OTAs and minicamps sometimes yield useful news nuggets, and hopefully defensive coordinator Keith Butler’s comments about the pitiful state of tackling in Pittsburgh will prove to be one of them. Per the Tribune-Review’s Joe Rutter’s report, Butler isn’t pulling any punches in his self-assessment: “It’s as simple as you can get. Look at the whole last year and we missed a ton of tackles.”

According to Butler, the Steelers plan to focus on tackling during training camp, offering that the art of tackling isn’t even something that’s taught much at the college level anymore:

Those are refreshing words from a defensive coordinator of a team that gave up three rushing touchdowns to the Jacksonville Jaguars in a single quarter during the AFC Divisional playoff game. For years, fans have complained about how missed tackles have plagued the Steelers, peppering beat reporters like Ed Bouchette with questions about why things never improve.

It should be noted, at St. Vincents in Steelers 2013 Mike Tomlin departed from the script and ordered live tackling during training camp. Tomlin hadn’t even told Kevin Colbert he was going to do this, who apparently went apoplectic when he saw it. Tomlin’s goal was to form a “battle hardened unit.”

That didn’t quite work, as the Steelers lost 4 starters to injury on opening day and went 0-4 and then 2-6. And no one rushed to apologize, “But they’re the best tackling 0-4 team we’ve ever seen….”

Butler’s comments suggest that Steelers coaches are going to focus on the latter. No ever one solved a problem they failed to acknowledge. Butler clearly recognizes the Steelers problem with missed tackles, and he plans to address it, by going back to basics. Chuck Noll would concur.

One thought on “Back to Basics: Keith Butler’s Promise for Steelers to Practice Tackling is Music to the Ears”