Ryan Malleck returns to Pittsburgh after spending 3 months on the Steelers 2017 off season roster from February to May. After getting cut by the Steelers, Malleck spent time with the Ravens, and earned a spot on the Houston Texas active roster, where he saw action in two games, including catching one pass against the Steelers in Pittsburgh’s Christmas night win over the Texans. 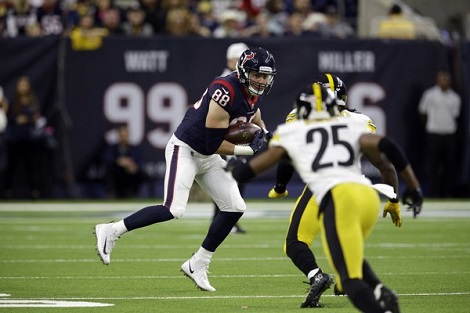 The Steelers penciled in Jerald Hawkins as their 3rd/swing offensive tackle and heir apparent to Chris Hubbard. Third round draft pick Chukwuma Okorafor will get first shot at that job, but the Steelers have given Mike Munchak a bit of an insurance policy should Chukwuma Okorafor falter.

Jake McGee spent 2017 on the Steelers practice squad, where he drew rave reviews from Steelers 24/7 reporter Jim Wexell. The Steelers had expected Jake McGee to give Xavier Grimble a run at the third tight end position behind Vance McDonald and Jesse James.

The Steelers have another week of OTA’s remaining, followed by mandatory mini-camp. After that, the real off season begins until convening for training camp in July at St. Vincents in Latrobe.