As a young Steelers fan in the early 80’s, I often got the two Keiths on their defensive line mixed up.

One wore No. 92. The other wore No. 93. One was the 17th overall pick out of Oklahoma in the 1981 NFL Draft. The other was an undrafted free agent out of Northeastern in 1982. One obviously had the size and pedigree coming out of college. The other, as a 235-pound rookie, didn’t. One would obviously be given every opportunity to succeed–even after deciding to jump to the Canadian Football League for two seasons.

The Keith I want to talk about wasn’t the one with the draft pedigree and the big school on his resume. That was Keith Gary, No. 92, the aforementioned 17th overall draft pick who decided to give the CFL a try before signing with Pittsburgh in 1983. 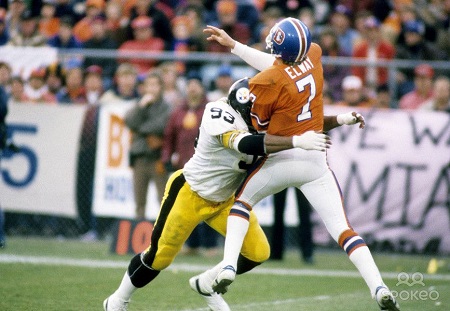 However, that same season, the undersized and undrafted free agent out of Northeastern, Keith Willis, No. 93, nearly doubled the former first round pick by posting a whopping 14 sacks for the Steelers, a record which Aaron Smith couldn’t break nor has Cam Heyward, yet….

While Keith Gary would go on to have a rather disappointing career for the Steelers that included just six seasons, 35 starts and 25 quarterback sacks, Keith Willis played 10 seasons in Pittsburgh, started 88 games and recorded a remarkable 59 sacks.

When Keith Willis left Pittsburgh following the 1991 season, he was the franchise’s all-time leader in sacks. Sure, the quarterback sack was a statistic not made official until Willis’s rookie year (yes Mean Joe Greene and L.C. Greenwood both posted higher unofficial sack totals), but that’s still a heck of an accomplishment for a player who arrived as an afterthought when he arrived to town less than three years after Super Bowl XIV.

While few realized it at the time, in part due to three straight playoff appearances in ’82, ’83 and ’84, the Steelers dynasty  of the 1970’s was fading rather than reloading by the time Keith Willis made his first roster in the strike-shortened ’82 campaign.

Three years after his 14-sack campaign, Keith Willis managed to hit double-digits again, when he recorded 12 for a team that lost 10 games.

While Keith Willis never got to experience the trappings of a championship-level team–the Steelers only made the playoffs four times during his career in Pittsburgh — he certainly got the most out of his undrafted pedigree.

“For certain people, you weren’t anything but a free agent but I never fell prey to that,” said Willis in a Pittsburgh Post-Gazette article from 2003. “My attitude from the first was ‘Come try me.”

Today, some 27 years after his Steelers career ended, Keith Willis still ranks fourth in franchise history in sacks behind James Harrison, Jason Gildon and Joey Porter. And, again, while Mean Joe Greene and L.C. Greenwood may unofficially have more, Keith Willis is officially the Steelers defensive lineman with the most career sacks.

“A lot of people never thought that a guy from Northeastern would end up leading the Steel Curtain in sacks, but there I was.”

There you were, indeed, Keith….Willis, that is, the undrafted free agent who lacked the pedigree and the size but managed to beat the odds anyway. It’s a shame that Keith Willis is sort of a forgotten defensive hero in Pittsburgh, but that’s somewhat typical of good players (think David Little) who played on some mediocre or worse Steelers teams of the 1980’s.

But championships or not, Keith Willis was one hell player, and its only fitting that we remember him and honor his contributions to the legacy of the Steelers defensive line.