Who are former Pittsburgh Steelers Bill Dudley, Elbie Nickel, John Reger and Myron Pottios and what they mean to the franchise’s legacy? Unless you’re in your mid-60’s or older, you’ve probably never heard of them, let alone considered their importance.

After you read Jim Wexell’s Men of Steel, an 187 page volume published in 2006 and reissued in 2011, you’ll know more about 36 men who wore the Black and Gold before during and after the Super Bowl era and what’s more, Wexell’s work will make you care about their contribution to the Steelers legacy.

Each of the 36 Steelers Wexell profiles gets between four and five pages to tell their story, including first hand interviews, highlights from the player’s career and an update on each player’s “Life’s Work.” 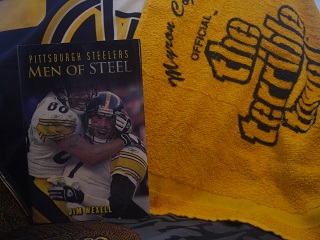 Wexell effectively employs this spare approach to lend a rich relevance to the stories of familiar players to players from yesterday that even the most diehard Steelers fans will struggle to recognize.

The average “educated Steelers fan” might be vaguely familiar with the Steelers role in effectively ending the career of Y.A. Title, but most probably don’t know that the man who sacked Tuttle on that fateful play was John Baker, a man who went on to serve as sheriff of Wake County, North Carolina for the better part of two decades.

Devoting so much space to pre-Noll era Steelers might seem counter-intuitive from a commercial stand point, but Wexell explains, “I wanted to get the same amount of Steelers from each era, with the stipulation that I have to talk to them.”

Expanding on this goal, Wexell details, “I heard that Steelers fans wanted more of the stars, but I just assumed they had access to the internet. I’ve always wanted to know about some of the older players.” Wexell learned and shared stories.

And on that front, Wexell delivers, benefitting on guidance from the Steelers legendary PR man Joe Gordon, who for example, pointed him in the direction of Johnny Lattner, the only Heisman Trophy winner to sign with the Steelers.

Jim Wexell weaves each tale by starting with a key fact or action taken by the player, establishing its significance to the narrative and then providing the reader with a firsthand account from the player. After that, Wexell navigates seamlessly through the player’s college, pro and post-football careers.

A book browser who might pick up Men of Steel, scan its table of contents, and see that Wexell takes 16 chapters to get to the beginning of the Super Steelers era could easily put the book down thinking there’s nothing interesting in there for fans focused on rooting for Mike Tomlin to bring home Lombardi Number Seven.

Wexell combines crisp, succinct sentences with detailed, game-specific research to deliver compelling stories about men who blazed the trails that opened the way for the NFL and the Steelers to become the icons we adore today.

Wexell matches his economy of words with copious research, as he relates, “There’s really my art. I love research. I love sitting in libraries and poring through microfiche.”

The majority of Wexell’s Men of Steel is devoted to telling the stories of the Steelers from the Chuck Noll era onward. Steelers fans will see names that they know, starting with Joe Greene and ending with stories on Hines Ward and Ben Roethlisberger.

Wexell secured an exclusive interview with the Steelers signal caller prior to Super Bowl XLV and also documents a pre-draft nugget linking Roethlisberger to Steelers scout Mark Gorscak (the need for greater insight into the Steelers draft evaluation process has long been a pet cause of this site.)

Along the way, Wexell scores a rare interview with Jack Lambert. When prodded about how he got the reclusive Steelers legend to speak, Wexell shares that he’d tried, and failed to get an interview for his first book, Tales from Behind the Steel Curtain and for Men of Steel:

[For] , Men of Steel, I made the cursory call. He didn’t answer. I left a message, again, figuring he wouldn’t call back. But he did. “I don’t usually return calls to people like you,” he said with a pause. “But I thought your first book was the best Steelers book ever written. How can I help you?” 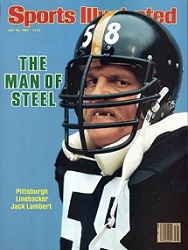 Lambert not only answered Wexell’s questions, but was surprised that the author only wanted to speak with him for 45 minutes and confesses, “To this day I’m kicking myself for not having more philosophical questions for a guy who obviously wanted to talk about pure football.”

Still, Wexell got enough to impress one of the most popular Pittsburgh Steelers of all time, as after sending him a copy, Jack Lambert wrote Wexell back:

It’s New Years Eve and I’m sitting down in the basement with my friends, a Michelob bottle and a pack of Tareytons. A long overdue thank you for sending me “Men of Steel.” … I just finished it and enjoyed catching up on some of my old teammates.

Aside from Lambert, Wexell also had the foresight to include stories on then yet-to-be Hall of Famers Rod Woodson, Dermontti Dawson and Kevin Greene.

But that’s essentially a function of the fact that we already know so much about those men. You’re not surprised when you enjoy reading Merril Hoge’s reflections on how special the 1989 Steelers playoff run is the way you unexpectedly crave more after learning of John Reger’s role in the 1955 MNF season opening win over the Chicago Cardinals at Forbes Field.

For transparency’s sake, its important to note that Men of Steel is not a perfect work and does contain a few factual errors. But just as a quarterback can throw an interception but still play a great game, these mistakes don’t keep Men of Steel from being a great book.

When asked what Steelers fans in 2018 can expect to gain by reading Men of Steel, Wexell concedes that he hasn’t given the question much thought, but then offers, “I love writing biographies because that’s where I learn the most.”

This reviewer concurs. Jim Wexell’s love for his subject matter is apparent on every page of the book, and so are the lessons he’s learned from those Men of Steel.

As of this posting, limited copies of Jim Wexell’s Men of Steel remain available on Amazon.com.