Steelers 2018 training camp only two days old, but already there’s a piece of positive news: Pittsburgh’s PUP list is short. That’s something that is easy to take for granted and injuries can alter an entire team’s fortune in a blink of an eye. But for now it is a good thing. 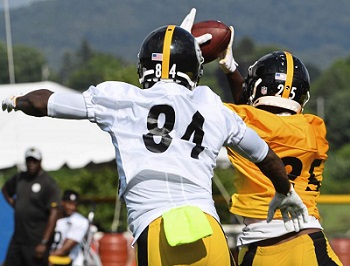 The Steelers of course signed Eli Rogers Wednesday and will keep him on the PUP list until he’s fully recovered from the torn ACL he suffered in the Steelers playoff loss to the Jaguars. But other than that, there’s no injury of note.

Too often in recent past, training camp has arrived with surprise injury announcements.

In 2008, Casey Hampton began on the PUP list, although that was more tied to conditioning issues than injury. Back in 2015 the Steelers started training camp with 5 players on the PUP list: Maurkice Pouncey, Mike Adams, Bruce Gradkowski, Shawn Lemon and Senquez Golson.

Maurkice Pouncey’s stint on the PUP list was short, but he fell injured in the Steelers preseason game against the Green Bay Packers. Mike Adams injury hadn’t been known, and he stayed on the PUP list all season and never returned to Pittsburgh.

Bruce Gradkowski’s injury came as a total surprise, as he’d last been seen playing very well in brief relief of Ben Roethlisberger in the Steelers 2014 playoff loss to the Ravens. Like Pouncey, Gradkowski earned his PUP activation, only to injure himself in preseason leading to Mike Vick’s signing. Shawn Lemon was of course the CFL pass rusher the Steelers signed earlier. He made it of PUP only to get cut.

Senquez Golson went on IR, then got injured in both 2016 and 2017 training camp, and the second round pick has never spent a day on an active NFL roster.

Ladarius Green headlined the list, as he was both nursing an ankle injury and still fighting lingering effects of a concussion from the previous season. People will forget, but Ladarius Green actually did prove to be a fairly effective weapon in his limited action, but he suffered concussion against in December, and has never played since.

As noted at the outset, a short PUP offers no guarantee. Last year the Steelers began training camp with a relative clean bill of health, but ended up seeing Joe Haden, Antonio Brown and Ryan Shazier suffer injuries at the worst possible moment.

But I’ll take the Steelers starting the summer at St. Vincents at close to full health any time I can!