For those of you too young to remember, and for those old enough to never forget, Nintendo’s Tecmo Bowl and Super Tecmo Bowl were the Madden of its day. Oh, Madden co-existed with the Tecmo series, but John Madden Football (as it was called then) was more of a PC game.

Tecmo Bowl beat those early Madden incarnations by a mile. The game play of the original Tecmo Bowl had its faults. It didn’t field 11 players, only offered a 4 plays menu, only featured 12 teams, and players could get bounced from the screen when your opponent made a big play.

Super Tecmo Bowl fixed those problems, incorporated the entire NFL, expanded play selection, and offered more realistic game play. The original Super Tecmo Bowl came out in 1991, so it was based on the 1990 season. It was a good game, yet it was not terribly kind to the Pittsburgh Steelers. The main reason?

Now let’s be clear folks. If the Bubster did suffer from being on the short end of Super Tecmo Bowl ratings stick, its not quite the same level of football “injustice” as Ben Roethlisberger going for so long without getting recognition as an elite quarterback.

1990 was Bubby Brister’s third year as a starter, which when quarterbacks evaluations shift from potential to performance and Bubby’s limitations were becoming clear by then. 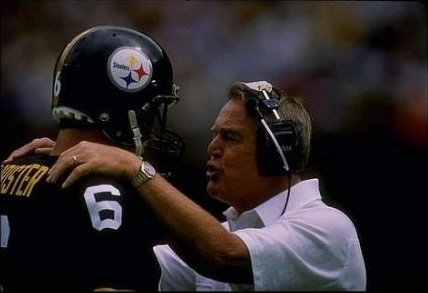 Super Tecmo Bowl featured 56 quarterbacks, or 2 for each team and, believe it or not, the Super Tecmo Bowl ratings for each quarterback are available on the internet. Where does Bubby Brister rank? 44th Out of 56. In fact, Rick Strom, Brister’s backup is listed at 43.

Clearly Bubby Brister was no Joe Montana, but among others, Super Tecmo Bowl lists Marc Wilson, John Fourcade, Ken O’Brien, Erik Wilhelm, Jeff Carlson(who?), and Tom Tupa (a punter for heaven sakes) above Brister. This despite the fact that Brister had a playoff game win on his resume, and despite the fact that no General Manager in the NFL would have picked any of the players above Brister in 1990.

Indeed, as Steelers fans who played Super Tecmo Bowl learned, Rick Strom WAS in fact a better starter than Brister. (If you’ll believe, there’s actually a Super Tecmo Bowl fan forum where Strom vs. Brister gets debated. And to be fair Super Tecmo Bowl listed Greg Lloyd as the 5th best linebacker, and this was long before Greg Lloyd won national recognition.)

Back then we didn’t have the internet or social media to launch protests over such slights. After walking to school uphill (both ways!) barefoot in the snow, we simply had to buckle our chin straps, grab our game controllers and play the hand dealt to us. Which wasn’t too bad.

Yours truly once led the Pittsburgh Steelers to victory in a college dorm room Super Tecmo Bowl Championship with Rick Strom starting for the bulk of the season. It wasn’t until reaching the Super Bowl against the San Francisco 49ers, Bubby Brister came off the bench to hook up with Louis Lipps to get Gary Anderson into field goal range to force over time.

From there it was Rod Woodson beating Jerry Rice on a jump ball in OT, a couple of runs by Merril Hoge, Warren Williams and Tim Worley and Gary Anderson was kicking another long one for the win. So:

To moral to this story?