When people think of former Steelers head coach Bill Cowher‘s first season in Pittsburgh–1992–one of the first things that comes to mind is his initial game, a 29-24 come-from-behind victory over the Oilers at the old Astrodome in Houston.

Yes, it was a great way to kick off a career that would certainly put The Chin in rarefied air is it pertained to Pittsburgh coaching legends–the decision to try a fake punt, down 14-0 early in the game was an indication to the old AFC Central Division that this Steelers team and this Steelers coach were here to win. 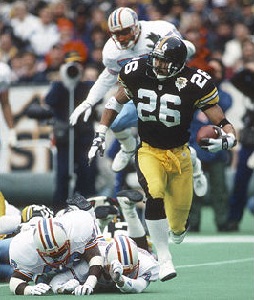 And win the Steelers did in ’92, five of their first seven games, in fact, and were primed for a first place showdown with Houston, a rematch that would take place at Three Rivers Stadium on November 1, 1992.

With the help of an old LA Times post-game article, we know the Oilers jumped out to a 6-0 first half lead thanks to two Al Del Greco field goals–one from 29 yards away and the other from 19 yards out.

Pittsburgh took the lead later in first half on a one-yard run by Barry Foster, a running back who would go on to break the Steelers single-season rushing mark with 1,690 yards and tie an NFL record with 12 100-yard games.

Behind 7-6 early in the third quarter, the Oilers lost their star quarterback and Steelers nemesis, Warren Moon, after Moon was hit on the chin by cornerback Rod Woodson.

Speaking of nemeses, Cody Carlson, the unknown youngster who cost Pittsburgh a division title and playoff spot just two years earlier when he filled in for an injured Moon in the 1990 regular season finale and torched the Steelers defense for 60 minutes, entered the lineup and continued where he left off.

That was bad enough, but just 1:03 later, Ray Childress scooped up a fumble by Steelers quarterback Neil O’Donnell and raced eight yards for yet another touchdown, stunning the Three Rivers crowd and giving Houston a 13-point advantage.

But the Steelers were no strangers to overcoming such deficits against Houston in ’92: “We were down 20-7, but we’ve been there before,” Cowher would go on to say later.

Early in the fourth quarter, Neil O’Donnell connected with tight end Adrian Cooper on a two-yard touchdown pass to pull Pittsburgh to within 20-14.

Midway through the final period, following a fumble recovery by legendary linebacker Greg Lloyd, the Steelers went ahead, 21-20, on a five-yard touchdown pass from Neil O’Donnell to the other and more decorated tight end, Eric Green.

It wasn’t over yet. The Oilers had one more chance. Cody Carlson had one more opportunity to stick a dagger in Pittsburgh’s heart–and if not end its season, at least capture sole possession of first place.

As Carlson methodically drove the Oilers’ offense down the turf at Three Rivers Stadium in the final moments, I could sense another heartbreaking loss coming on the horizon. As the seconds ticked off the clock, and Cowher kept the Steelers final timeout in his back pocket, I figured a turnover was all that could save the day.

And when Cody Carlson set up Del Greco at the 22 with seconds left, I kind of resigned myself to second place in the Central.

Bill Cowher’s instincts were on the mark. The day was actually saved by Del Greco, himself, who hooked the seemingly make-able field goal, giving the Steelers not only sole possession of first place, but an all-important sweep of Houston.

As the fans in attendance went nuts, some of whom were seen dancing and hugging on the top of the dugout, I felt the kind of magic that fans must have experienced two-decades earlier, when the 1972 edition came out of nowhere and captured the hearts of an entire region (for good).

Yes, it felt like the 70’s to a 20-year old who really didn’t know any better. The one thing I knew for sure:

I’ll leave you with a quote from Greg Lloyd, who never backed down from a fight and was certainly at the forefront of the team’s resurgence in the 1990’s: