Ah, gotta watch those June Achilles tears. On the Jesse James return to practice following his injury in Pittsburgh’s preseason win over Tennessee, but tight end could be a tight spot for the Steelers this season, and if it is it will have all started with a June Achilles injury. 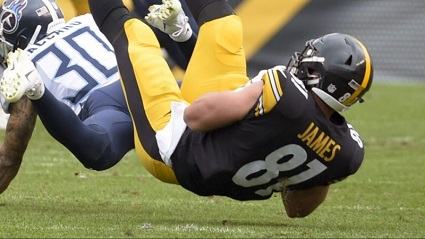 Pittsburgh’s problems at the position of began during spring practice, when reserve tight end Jake McGee torn his Achilles tendon during OTAs. The Steelers had carried McGee on their practice squad during 2018 and coaches expected McGee to push Xavier Grimble for a roster spot.

The Steelers situation at tight end grew more complicated arrived at St. Vincents when Vance McDonald injured his foot after after only one day of practice. Vance McDonald has not practiced since that fateful day in July, although Mike Tomlin has publicly listed McDonald as “Day-to-day.”

The Steelers of course acquired McDonald last season in a trade, only to see him sit on the sidelines injured, although he rebounded for strong game in the playoff loss to the Jaguars.

That left Xavier Grimble and Jesse James, but Grimble injured his wrist/thumb on a blocking sled on August 18th and had to have surgery. Grimble has been characterized as “Week-to-week.” If McDonald’s absence is any guide, perhaps month-to-month would be for fitting for Grimble.

Let’s hope that not the case, but as good Reimagined Battlestar Galactica fans know, “All this has happened before and [hopefully] will [not] again.”

June Misfortunes Can Set the Tone for an Entire Season

The advent of the digital age has magnified everything. Trivial, bit-sized bites of Steelers news that once would have merited 2-3 inches of newspaper column wedged in somewhere deep in the back pages of the Pittsburgh Press or Post-Gazette now serve as feature-length click generating stories (sometimes for good reason, sometimes not.)

Take the case of Willie Colon. In 2010 Willie Colon, the Steelers starting right tackle, tore his Achilles tendon in late June. This came after Steelers 5th round draft pick Chris Scott had already broken his leg. Those two injuries initiated a torrent of offensive line injuries that lasted the entire year.

During the Steelers 2010 win over Tampa Bay, the Steelers were force to substitute so many offensive lineman that Mike Tomlin remarked jokingly (or perhaps not so jokingly) that coaches didn’t even know who was in and who was out of the game.

The Steelers lost Max Starks in week 7 against Cincinnati, and in the next week against New England, Ben Roethlisberger suffered 5 sacks as the Patriots collapsed the Steelers offensive line at will. Roethlisberger’s sack rate nearly doubled with Jonathan Scott starting at left tackle.

After the Steelers playoff win against the Ravens, Ben Roethlisberger lauded Flozell Adams for wanting to come off of a gurney to return to the game, and Pittsburgh of course was forced to start Doug Legursky at center in Super Bowl XLV due to injuries to Maurkice Pouncey.

Will the same thing happen to the 2018 Steelers at tight end? Hopefully not, but with less than two weeks to go before the regular season, tight end appears to be the Steelers Achilles heel.