Going into January’s playoff debacle vs the Jaguars, the Steelers had invested 9 of their last 12 premium draft picks on defense. Yet with 8 them on the field, Blake Bortles and Leonard Fournette still hung 45 points on the Steelers defense…. 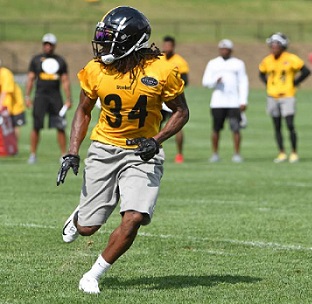 Does it mean that Kevin Colbert and his scouting team simply did a good job in picking guys who have God-given talent? Or does it mean that Mike Tomlin and his staff molded that talent into NFL-caliber technique? The question is not as simple as one might think. Consider the stories of two safeties:

The first is Darren Perry, who in 1992 as an 8th round pick out of Penn State blew past veterans Larry Griffin and Gary Jones and allowed the Steelers to end Thomas Everett’s hold out via trade. Troy Polamalu is the second safety. He didn’t start a game and looked lost early and often as a rookie, but recovered to author a Hall of Fame career.

No one drafting today would pick Perry over Polamalu.

This is certainly a nurture vs. nature question that defies a definitive answer. Clearly, Polamalu was the superior athlete, but Darren Perry arrived in the NFL as the better football player. Polamalu simply needed a little more nurturing. But it isn’t always so simple.

Tom Donahoe and Bill Cowher’s third draft pick was nose Joel Steed, whom they wanted to groom to replace Gerald Williams, so that Williams could move to defensive end.

However, when Gerald Williams got hurt it wasn’t Joel Steed who went in, but rather undrafted rookie free agent Garry Howe. Howe not only secured playing time at Steed’s expense, but if memory serves, he came up with a key fumble recovery.

As for Garry Howe? The Steelers cut him and if Pro Football Reference is accurate, he played a game for Cincinnati in 1993 and one for the Colts 1994 and was done.

You’d be tempted, but you’d be wrong, as the career trajectories of Troy Edwards and Kendrell Bell illustrate. The Steelers picked Troy Edwards (narrowly passing on Jevon Kearse) with the 13th pick in 1999 NFL Draft, and Edwards won the starting job alongside Hines Ward and led the team with 61 receptions.

Going into his second year, facing criticism about his commitment to off season training, Edwards scoffed explaining that “You can’t race air.” Edwards never started another game for the Steelers, and had one decent year in Jacksonville but never matched his rookie production.

With nine sacks, 70 tackles, a forced fumble and a defensed pass on his rookie resume, comparisons to Jack Lambert seemed warranted. But that was it for Bell. To be fair to Bell, he suffered one of those dreaded “high ankle sprains” during his second year and suffered other injuries.

It seems that raw athleticism can indeed jump start an NFL career, but that if its not developed, you’ll sputter out quickly.

What does all of this tell us about the prospects for the 2018 Steelers defense?

When Franco Harris, who struggled a bit in as a rookie camp, took his first preseason carry, discarded the play call and reversed course to go the length of the field to score a touchdown, Chuck Noll’s instruction to Dick Hoak was “Don’t over coach the kid.” Yet players like Merril Hoge and Jerome Bettis unhesitatingly sing Dick Hoak’s praises coaching ability.

It seems like, with parenting, a good coach must strike a balance between offering guidance and letting players be themselves.

Jumping to concussions after the first 10 days of training camp is never wise.

It will take a few months to know more about the Steelers defensive talent development exercise. But whether its because of nurture or nature, the early returns are positive.