The Pittsburgh Steelers opened their 2018 preseason campaign against the defending Super Bowl Champion Philadelphia Eagles. Here is their Report Card. 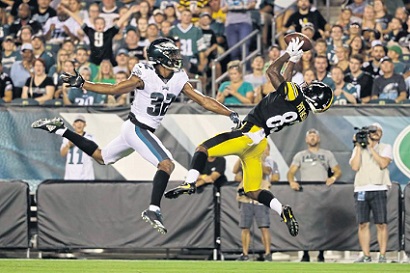 Quarterbacks
As has become the custom the past few summers, 15-year and future Hall of Fame quarterback Ben Roethlisberger didn’t start the Steelers preseason opener against the Eagles at Lincoln Financial Field on Thursday night.

Backup quarterback Landry Jones got the start, playing three series and completing four of four passes for 83 yards and a 71-yard touchdown strike to second-year receiver JuJu Smith-Schuster. Second-year quarterback Joshua Dobbs played the rest of the first half and completed nine of 13 passes for 91 yards, one touchdown and one interception. Joshua Dobbs led Pittsburgh on two touchdown drives in the second quarter. Dobbs set up the first scoring drive with an 18-yard run As for the second score, it was a sensational 29-yard touchdown pass to rookie receiver Damoun Patterson. Rookie Mason Rudolph took over the reins in the second half and completed seven of 12 passes for 101 yards. Grade: B-

Running Backs
Training camp holdout or not, star running back Le’Veon Bell wasn’t going to play, Thursday night. In his place, were a host of running backs, including veteran Stevan Ridley, who led all Steelers backs with 10 carries but for only 14 yards. Fellow veteran Fitzgerald Toussaint led the way with 29 yards and a touchdown on seven carries, while second-year man James Conner tallied an impressive 25 yards on just four carries. Grade: C

Wide Receivers
The youngster, Damoun Patterson, was the receiving star of the night, as he was targeted 10 times, while pulling down six catches for 77 yards and the touchdown grab that was every bit as sensational as Dobbs’ pass. Smith-Schuster tallied only one catch for the aforementioned 71-yard score, while rookie James Washington grabbed two passes for 44 yards–including an impressive combat catch near the sidelines in the second half. Grade: B

Tight Ends
Nothing newsworthy from this group. Veteran Jesse James caught just one pass for two yards. Vance McDonald sat out with an injury, while Xavier Grimble was shutout in the box score. Grade: Incomplete

Offensive Line
Missing several key starters–including Maurkice Pouncey and David DeCastro due to injury prevention and veteran Ramon Foster due to an actual injury, Jones and Company weren’t afforded with the best protection. Sure enough, both Jones and Rudolph were sacked twice each. Grade: C-

Defensive Line
Cam Heyward didn’t play at all, Stephon Tuitt played very little, while Javon Hargrave saw the most action out of the starters. The Eagles were held to 106 yards rushing, which is perhaps a testament to the backups and how they’re learning under first-year defensive line coach Karl Dunbar. Grade: C

Linebackers
Inside linebacker Tyler Matakevich led the way with four solo tackles, while Jon Bostic collected three. However, neither really distinguished themselves in the battle for the starting job alongside Vince Williams. As for outside linebackers, Anthony Chickillo recorded one sack, while rookie Olasunkanmi Adeniyi made the defensive play of the night, with a strip-sack early in the third quarter that set up a field goal. Grade: B+

Secondary
Despite missing a good bit of training camp battling injury, Morgan Burnett, the strong safety acquired via free agency in the offseason, looked really good, same for rookie first round pick Terrell Edmunds. Coty Sensabaugh and Cam Sutton each recorded an interception, while Dashaun Phillips provided the low-light for the night when he was burned badly on a 63-yard touchdown pass in the second quarter. Grade: C

Special Teams
Nothing much of note on special teams, as rookie Quadree Henderson only had one chance to return a kickoff, while Justin Thomas totaled just 12 yards on three punt returns. Kicker Chris Boswell converted all three of his field goal attempts and both extra points. As for the punters, veteran Jordan Berry averaged 41.7 yards on three punts, while the unknown Matt Wile totaled 96 yards on two punts. Grade: C

Coaches
It was the first preseason game, complete with vanilla game-plans that were executed by a lot of guys who won’t be around in a few weeks. Grade: Incomplete