The Pittsburgh Steelers preseason tonight against the Philadelphia Eagles. Most fans will welcome the return to the gridiron after a 2017 that ended so abruptly.

Taking our cue from the late Ken Beatrice, season ticket holders who must pay major league prices to see minor-league talent have beef. As for the rest of us? Well, that’s why we have our annual “Eat your liver and your Brussels sprouts and enjoy preseason football” article.

So if you have a case of the preseason football humbug, Mike Hilton’s story will cure what ails you. 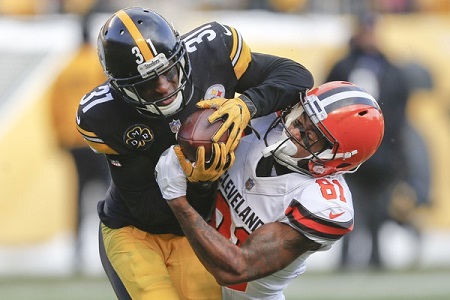 The Other Cornerback from Ole Miss

Unless you’ve been under a rock, cornerback has oscillated between being an urgent and major area of Steelers need since Super Bowl XLV. No need to look it up, that was in January, 2011.

Sadly, Senquez Golson never played an NFL down. But in late 2016 Kevin Colbert chanced that that Bill Belichick’s garbage might be his treasure when he signed Senquez Golson’s former teammate Mike Hilton to Pittsburgh’s practice squad.

The Problem with Cutting (or Eliminating) Preseason Football

The conventional wisdom holds that preseason is too long. Perhaps from marketing perspective that’s true as the NFL is not showcasing its top talent.

Fearing injury, coaches are loath to play starters in preseason. And when stars do suffer injuries, the howls to shorten preseason get louder. Michael Vick’s broken leg in the 2003 preseason offers a perfect example.

But that doesn’t change the fact that calls to shorten or eliminate preseason games are short sighted, and Mike Hilton shows why.

Doing it on the practice field and doing it under game conditions are two different things. Word was at the end of 2013 that wide receiver Justin Brown was an up and comer based on his work on the Steelers practice squad. Brown did earn a 2014 roster spot, but couldn’t produce in games and was gone before Christmas.

All of this begs the question: Would Mike Hilton have gotten these chances in a shortened preseason schedule?

If Mike Tomlin, Keith Butler and Carnell Lake only had two preseason game might their focus have been on getting reps for Ross Cockrell and Coty Sensabaugh, their prospective numbers 2 & 3 corners? If not, health allowing, reps for draft picks like Cam Sutton and Brian Allen would get priority over street free agents like Mike Hilton.

Fortunately, Mike Hilton got those reps, proved he belonged on Pittsburgh’s roster so much that a case could have been made that Hilton, and not T.J. Watt deserved the Steelers rookie of the… er um the Joe Greene Great Performance award.

Steelers Football’s Back – Enjoy It

Times change. A generation ago preseason served as the water fountain sitting at the end of a football desert. Today YouTube, Steelers.com, Twitter and Facebook feed us our year round football fix.

Preseason projections aren’t perfect (see Jarvis Jones in 2013), and 90% of the guys playing in the 4th quarter of the 1st preseason game will never see and NFL practice squad, let alone a roster. But preseason is the place where players like Merril Hoge, Greg Lloyd, Darren Perry, James Harrison, Willie Parker, Ramon Foster and Antonio Brown began making names for themselves.

The same thing will happen tonight night against the Eagles. So watch and enjoy.