The Steelers took on the Titans at Heinz Field on Saturday afternoon in the (say it with me) all-important third preseason. With the exception of a key superstar or two, all of the starters played for Pittsburgh, and the performance and results looked more akin to a Super Bowl contender than they did the previous week in Green Bay. 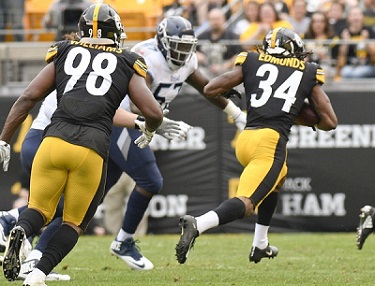 Quarterbacks
Ben Roethlisberger made his preseason debut and played three series, completing 11 of 18 passes for 114 yards and a 32-yard touchdown pass to Justin Hunter. He looked a bit rusty, as the many high passes to  Jesse James — including one that left the big tight end with a back contusion–illustrated. All-in-all, it was about what you’ve come to expect this time of year from the 15-year veteran. Landry Jones completed six of his nine pass attempts for 69 yards and an interception that was more on the receiver than on him. Mason Rudolph played the entire second half and completed seven of 11 passes for 65 yards, as he often utilized short, underneath passes to running backs out of the backfield. Grade: B-

Running Backs
James Conner started, and while his rushing performance left a lot to be desired (just 18 yards on 10 carries), he was very Le’Veon Bell-like, as he compiled 52 receiving yards on six catches. Rookie Jaylen Samuels was the workhorse on the day and a mighty fine one that that, tallying 41 rushing yards on 11 carries, along with 36 receiving yards on four catches out of the backfield. Grade: B

Wide Receivers
Second-year man JuJu Smith-Schuster led the way with six receptions for 46 yards, but he did have a couple of notable drops. Other than Smith-Schuster and Hunter’s aforementioned 32-yard score, it was a rather quiet day for the receivers.  Rookie James Washington was targeted twice on the day and left with zero catches after suffering an oblique injury. After standing out in the first preseason game, Damoun Patterson’s workload continued to decline, as did, one would think, his chances of making the final 53-man roster. Grade: C

Tight Ends
It was another day without Vance McDonald and another quiet game for the Steelers tight ends. James left with two receptions for 17 yards after suffering his aforementioned back injury, while no other tight end did anything of significance. Grade: Incomplete

Offensive Linemen
With the exception of Ramon Foster, the Steelers star-studded offensive line played as a unit for the first time this preseason, and while the big guys had to shake off some rust, they afforded Roethlisberger with the suburb protection he’s become accustomed to in the latter stages of his career. In-fact. even when super-subs such as Matt Feiler and B.J. Finney were in the game, holes were being opened, and quarterbacks were being protected. Grade: B+

Defensive Linemen
Perhaps for the first time since suffering a torn biceps in Week 1 of the 2017 season, Stephon Tuitt looked like a man possessed, as he continuously found his way in the Titans’ backfield and came away with one sack and two quarterback hits on the day. Cam Heyward also returned to his 2017 All-Pro form, recording one sack and two tackles for loss. Javon Hargrave looked decent, as did Tyson Alualu and L.T. Walton in their usual reserve roles. Grade: B+

Linebackers
T.J. Watt continued to sit out with a hamstring injury, and it was a quiet afternoon for Bud Dupree. However, Olasunkanmi Adeniyi continued to make a strong case to make the final cut, as he recorded yet another sack this preseason. Fellow outside linebacker-hopeful, Farrington Huguenin, was also pretty active and contributed with a sack of his own. As for the inside linebacker spot, Vince Williams celebrated his new contract by tallying three tackles and a sack before exiting for the afternoon. As has become the case in recent seasons, L.J. Fort looked solid when given playing time.

But perhaps the biggest story of this preseason–one that will likely continue to grow if his exceptional play continues–was undrafted free agent, Matthew Thomas, who led all Steelers defenders with nine tackles–including five solo. Grade: A

Secondary
Artie Burns‘ name was hardly mentioned, which is generally a good thing for a cornerback. Rookie first-round pick, Terrell Edmunds, created a turnover for the second week in a row, when he intercepted a pass in the first half and then proceeded to turn on the jets as he returned it 30 yards into Tennessee territory. The Titans never made it beyond midfield the entire first half, which means the secondary didn’t allow any big plays. Grade: A-

Special Teams
It was a decent day for veteran punter Jordan Berry, as he averaged 43.5 yards on two punts. But it was an even better day for backup Matt Wile, who averaged 48.7 yards on three boots. As for the kicking situation, Chris Boswell continued his ascension to the top of the NFL at his position, making all three of his field goal attempts–including a 45-yarder.

As for the coverage unit, if he can’t find his way to the top of the inside linebacker depth chart, Tyler Matakevich might one day find himself in Honolulu for his ability to be a special teams demon, as he was the first one downfield to stymie Titan punt returners on more than one occasion. Nat Berhe, who was brought in for that specific purpose, made a play that drew drew a congratulatory helmet slap from head coach Mike Tomlin immediately afterward.

Unfortunately, it continued to be a quiet day for the return game, which likely means the end is near for Pitt’s Quadree Henderson. Grade: B-

Coaching
Coming off an alarming performance against the Packers nine days earlier, the Steelers responded well in all phases of the game. Given that it was the regular season dress-rehearsal, that spoke volumes for the preparation heading into Saturday. Grade: B+