It seems the Pittsburgh Steelers find new and unknown receivers in camp each and every summer, prompting this writer to ask “Who needs Dez Bryant?”

Take two years ago, for example, when Eli Rogers, an undrafted free-agent out of Louisville who spent his entire rookie season of 2015 on Injured Reserve after suffering a foot injury in his very first training camp.

Rogers was one of the young sensations of the Steelers 2016 training camp and was rewarded by making the final 53-man roster. Not only that, but Rogers became the slot receiver and proved to be a dependable option for quarterback Ben Roethlisberger, catching 48 passes for 594 yards and three touchdowns.

Eli Rogers saw a decline in production a year ago, and he suffered a torn ACL in Pittsburgh’s playoff loss to the Jaguars on January 14. After recently being re-signed, he is currently on the team’s PUP list, hoping to get a chance to see if he can still be a part of the Steelers talented receiving corps. 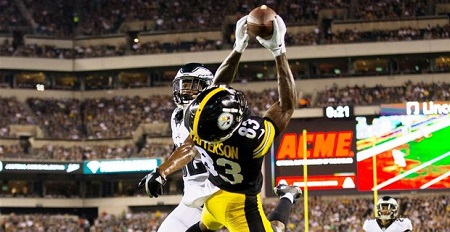 Damoun Patterson is now a true contender to be a part of the receiving corps after catching six passes for 77 yards and one dazzling touchdown in the Steelers preseason-opening 31-14 victory over the Eagles at Lincoln Financial Field in Philadelphia on Thursday night.

Patterson showed great body control as he spun around to catch a laser-strike from third-string quarterback Joshua Dobbs and great balance as he got one foot down in the end zone and then the other.

With Antonio Brown, JuJu Smith-Schuster, James Washington and likely Darrius Heyward-Bey all locks to make the squad, the fifth receiver position could be up for grabs.

Obviously, when he’s ready to depart from the PUP list Eli Rogers is a candidate, as is Justin Hunter, the veteran receiver the Steelers signed as a free agent in the 2017 offseason. However, Justin Hunter, despite his obvious physical attributes, has never truly broken out during his time in the NFL.

Another contender for that fifth-receiver spot is former University of Pittsburgh standout, Quadree Henderson. Henderson didn’t do much on Thursday, but he’ll obviously have ample time to impress his coaches between now and the final cut-down date.

But Damoun Patterson, who isn’t even listed on the Steelers official team depth chart (for what that’s worth in the preseason), has certainly done something to at least make his bosses take notice.

The Steelers obviously know how to find receivers to round out their depth chart–guys who have actually contributed during crucial moments (Cobi Hamilton caught a touchdown pass in the 2016 AFC Championship loss to the Patriots).

This summer, if it isn’t Patterson, Rogers or Henderson who rounds out the receiver depth chart, it will surely be another diamond in the rough we may not even be talking about right now.

The Steelers know their away around unknown wide receivers.