Sometimes the ball bounces your way. As Chris Boswell’s new contact with the Steelers show, the ball has (often) bounced Pittsburgh’s way when it has come to place kickers.

The Steelers resigned Chris Boswell today, inking the veteran kicker to a 4 year contact that will keep the Boz in Pittsburgh through the 2022 season. Chris Boswell had been a restricted free agent but the Steelers protected him with a 2nd round tender and not team was tempted to offer Boswell a contract. 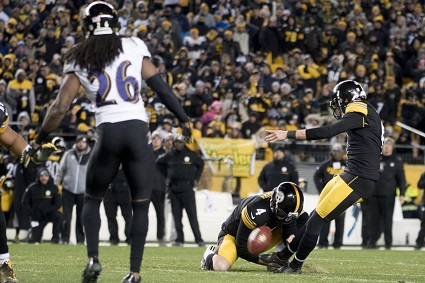 Chris Boswell has been one of the NFL’s most dependable kickers since arriving in Pittsburgh during the fall of 2015 that it is almost hard to remember that an uncanny series of calamities brought him to the Steelers.

It started with the Hall of Fame game during the year when Jerome Bettis finally earned induction into the NFL Hall of Fame when Shaun Suisham got injured. The Steelers went out and signed Garrett Hartley. Hartley lasted for a few preseason games, but then he got hurt, forcing the Steelers bring in Josh Scobee via trade.

Josh Scobee worked out well enough for the first few games, but in the Steelers game against the Ravens Josh Scobee missed two field goals in a game that ended 20-23, and Mike Tomlin promptly sent his 3rd place kicker of the season packing.

But Boswell immediately delivered, making several clutch kicks for the Steelers, incluging the game winner during their comeback playoff victory over the Cincinnati Bengals, and scoring all of the team’s points in the 2016 playoff win over the Chiefs.

Boswell also made a hell of a shoestring tackle against the Bengals in a key AFC North showdown in another six field goal performance.

Notwithstanding the injury misfortune that led the Steelers to sign Chris Boswell, the Steelers as a franchise have generally had good luck finding kickers when they’ve needed them. The Steelers wanted to draft Gary Anderson in 1982, but the Bills beat them to it. Buffalo cut him, and Anderson was a fixture for the next decade.

When a contract dispute led Anderson to seek greener pastures, the Steelers landed Norm Johnson, who kicked well for 3 years. Kris Brown had his ups and downs, and the Steelers tried to replace him in 2003 Todd Peterson, but he didn’t work out.

When Jeff Reed ran into issues, they were able to sign Shaun Suisham, who arrived in Pittsburgh with a questionable record, but turned out to be a clutch performer in his own right.

When it comes to finding quality place kickers, the ball has generally bounced Pittsburgh’s way.

Shortly after resigning Boswell, Steelers also made another move by resigning inside linebacker Vince Williams to a four year extension. Steel Curtain Rising will have more to say on the Vince Williams signing so stay tuned.