Tonight, Steelers fans in Mexico will watch the Steelers 4th game against the Carolina Panthers as they’ve done throughout the preseason thanks to the Steelers decision to stream preseason live in Mexico.

But with that said, I ask, ¿Y qué pasa con el resto de los fanáticos de los Steelers América Latina? For those of you who don’t speak Spanish, “What about the rest of us Steelers fans in Latin America?

But I “complain” for one selfish reason and one business reason that the NFL should consider. 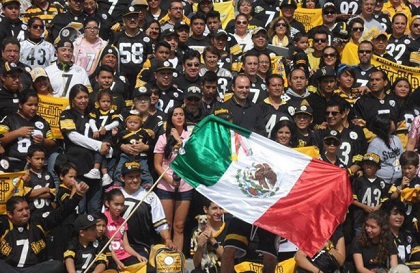 To be truthful, social media and internet video give fans new avenues for gaining insight without watching preseason games. Reading and seeing examples of Jon Bostic and Sean Davis struggling in pass coverage or seeing that James Conner running smartly is a welcome change.

Sure, you can scrape someone someone else’s work, but the internet is literally littered with “read and regurgitate sites” and Steel Curtain Rising strives to offer something fresh.

Absent access to preseason games, one is left recycling stories of Bam Morris looking off in 1995 while Lee Flowers looked good in the ’95 and ’96 preseason campaigns, or how George Jones look unsuited as Jerome Bettis’ understudy in 1997 or how the Steelers struggled at run blocking during the 1998 preseason.

It would be nice to write about the Steelers 2018 preseason campaign while referencing the preseason performances players like Antonio Brown, Jarvis Jones, Ryan Shazier or, even going back further, Lawrence Timmons and LaMarr Woodley. But alas, I can’t because I never saw any of them play in preseason.

Ah, but you retort, “If you’re such a preseason purist, why don’t you plunk down your pesos and pay for NFL Game Pass?”

Yes, I could plunk down my pesos and watch Steelers preseason games via Game Pass. Problem? I already pay for NFL Sunday Ticket on DirectTV. But, NFL Sunday Ticket only covers the regular season. Which leaves paying extra for the Game Pass as the only (legal) option for viewing Steelers preseason here in Buenos Aires, Argentina, as well as the rest of Latin America, outside of Mexico.

To that end, the logic of the late Washington DC sports radio legend Ken Beatrice guides me:

Seriously. It asking Sunday Ticket subscribers to pay extra to watch preseason on Game Pass is inane. Sorry Roger, you can get my money for the Sunday Ticket or for the Game Pass but you’re not getting both.

And if the NFL is serious about its global expansion, then those diehard fans are the base the league will build its global brand upon. Making it easy for them to indulge their passions by proving easy access to preseason football makes sound business sense.

We close by praising the Steelers again. Gustavo Vallegos the Vice President (really, he’s acting more like the President) of the Pittsburgh Steelers Fan Club of Buenos Aires brought this issue to the attention of the Steelers, and the Steelers responded:

In a nutshell, Sergio tells us that the Steelers short term goal was to make preseason games available in Mexico, while he acknowledges that there are Steelers fans around the world, and that little by little, they want to reach those fans.

The Steelers showing they care about their fans in Mexico, showing that they understand that fan base is even bigger and wants to take care of them. It is the right thing to do and a smart business decision.

Why is the rest of the NFL so far behind? Jerry Jones is once again floating an idiotic 18 game season complaining that “Its difficult to get people to watch preseason football.”

Well yeah, Jerry, difficult because you don’t even let those who want to watch it, watch it.