Le’Veon Bell’s absence and refusal to sign his franchise tender has been discussed to death in Steelers Nation. But there’s one story element that has largely been ignored: Le’Veon Bell’s holdout leaves the Steelers running back depth chart in both a familiar and precarious position. 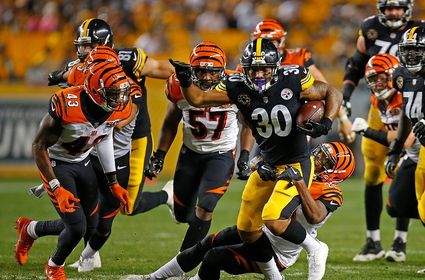 Since most of you don’t speak Spanish, Agus was asking if by keeping James Conner, Stevan Ridley, Jaylen Samuels Roosevelt Nix and Le’Veon Bell, the Steelers weren’t carrying too many running backs.

The answer surprised Agus and he asked me to explain. And I pointed out to the Steelers of starting Ben Tate, Fitzgerald Toussaint, Dri Archer and Jordan Todman in all too recent playoff games.

Maurkice Pouncey even argued that were it not for his injury history, former Pitt Panther James Conners would have been a first round pick. I don’t follow college ball, but Pouncey went to a major NCAA program, so he has the credentials to speak on the subject.

James Conner ran very well in his limited opportunities in 2017, and he authored a very strong preseason. And if Conners comes out and rips off a 100 yard game against the Browns and then again against the Chiefs, momentum will build in the Steelers Nation for Kevin Colbert to simply lift the tag and let Le’Veon Bell walk (which he won’t do.)

Stevan Ridley brings the Steelers solid experience, and his resume is that of a respectable number 2 NFL running back. But could he carry the load over the long or even medium term? Jaylen Sanders started the summer slow, but finished preseason as one of the player whom Mike Tomlin termed as “leaning into the tape.”

That probably earned Sanders a spot in the roster, although the suspicion here is that had Bell reported on Labor Day, Jaylen Sanders very well might have joined Olasunkanmi Adeniyi on IR. Sanders will be on the roster and likely get a helmet on game day against the Browns.

Which is good. Expect the rookie’s pass catching skills to be in demand with Vance McDonald out, and an injured Xavier Grimble starting opposite Jesse James in the number 2 tight end spot.

Pro offenses have evolved, and the Steelers roster composition has evolved with it. The days of carrying 5 running backs and a fullback are probably over. Moreover, when Ben Roethlisberger is your quarterback, investing so much salary cap and roster space in your running back depth chart makes even less sense.

As observed here last month, the Steelers have struggled to keep their top two running backs healthy for an entire season during the Mike Tomlin era. In 2008, the Steelers lost Willie Parker for a spell, then lose Rashard Mendenhall. Fortunately they had Mewelde Moore and Gary Russell to shoulder the load.

In 2010 Rashard Mendenhall and Isaac Redman remained healthy for the entire season, with Mewelde Moore and Jonathan Dwyer only seeing spot duty carrying the ball.

That remains Pittsburgh’s goal this year, but even if James Conner performs above expectations, Le’Veon Bell’s holdout greatly reduces the Steelers ability to adsorb an injury at running back.