Whew. The Steelers sure don’t like to make things easy for themselves. It may have taken 3 weeks, but the Pittsburgh Steelers notched their first win of the 2018 season with a nail biting victory over the Tampa Bay Buccaneers on Monday Night Football

The contest saw the Steelers build up a 30 to 10 halftime lead, only to hold on for dear life in the second period as Ryan Fitzpatrick led the Buccaneers to 17 unanswered points. 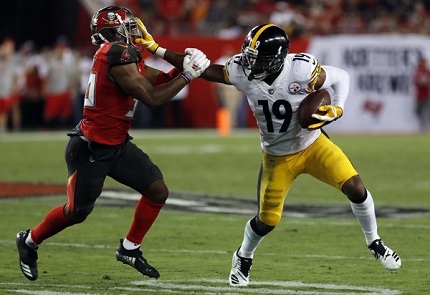 The game ended at just before 1:00 pm Buenos Aires time, and work looms tomorrow morning (thank God we haven’t reached fall back, when we’ll be two hours ahead of US Eastern time!) So there’s no time for detailed analysis beyond this rapid reaction:

Vance McDonald’s first touchdown a word of beauty. He literally not only knocked a defender on has rear-end with a stiff arm, but he barely broke stride in doing it. That play and his touchdown set the tone for the first half.

Both players had big turnovers. Terrell Edmunds interception was, while not quite Troy Poalmaluesque, showed the athleticism and big play ability that the Steelers wanted when they drafted him in the first round. Bud Dupree had a big night with a sack and pick six

Ben Roethlisberger’s interception appeared to be an ominous sign. However, the quarterback made time with his feet behind a make-shift offensive line and connected on three touchdown passes, and kept the chains moving just well enough in the second half to deny Tampa Bay the time it needed to mount a comeback.

Tampa Bay had struck within 3. The Steelers defense forced a 3 and out. The Steelers needed to kill the clock. In other words, everyone in the stadium knew the Steelers were going to run, and James Conners still delivered with not one but two decisive runs.

Keith Butler‘s defense made any number of splash plays during the first half, all of which were difference makers. However, going into the game, Bob Labriola compared Ryan Fitzpatrick’s current streak to the one that Mike Tomczak enjoyed early in the Steelers 1996 season.

That comparison was highly accurate. Nonetheless, the 2018 version of Mike Tomczak took the Steelers defense to the wire.

While the Steelers defense clearly was better than it was against Kansas City, this unit has a long, long way to go. One thing is certain, Joe Haden is clearly a difference maker for this unit. They are a different secondary with him in there.

It is now 1:06 am in Buneos Aires, and another long day of work looms tomorrow. Check back for our full analysis of  the Steelers MNF win over the Tampa Bay Buccaneers, either tomorrow eveing at around 7:00 pm Eastern, or Wednesday at 8:20 am Eastern.