Landry Jones isn’t alone. The Steelers cutting Landry Jones wasn’t the only surprise cut to come out of Pittsburgh.

In addition to saying good bye to a man that many thought was untouchable as their backup quarterback, the Steelers cut safety Nat Berhe whom they’d signed as a free agent, linebacker Keion Adams whom they’d picked in the 7th round of the 2017 NFL Draft and cornerback Brian Allen a 5th round pick from the 2017 NFL Draft who held a roster spot throughout 2017. 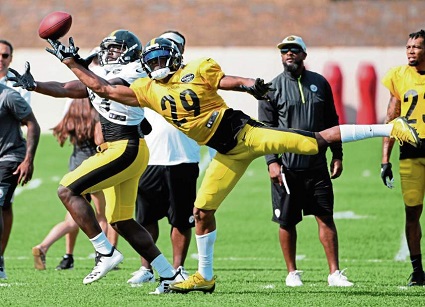 Both Keion Adams and Brian Allen were seen as two players with significant “upside.” However, Adams was outplayed by undrafted rookie free agent Olasunkanmi Adeniyi. Based on how one interprets one of his tweets, Nat Berhe could be returning to the Steelers, but such a move would require them to put someone in injured reserve.

The Steelers also placed Eli Rogers on the PUP list, and designated wide receivers Damoun Patterson and Marcus Tucker, offensive lineman Joseph Cheek, safety Malik Golden and linebacker Keith Kelsey as “injured waived” freeing them to sign with another NFL team but allowing the Steelers to retain their rights should they go unclaimed.

Joshua Frazier, whom the Steelers picked in the 7th round of the 2018 NFL Draft, was the only member of the Pittsburgh’s draft class to get cut, and Frazier will likely return on the practice squad.

The rest of the Steelers cuts included:

The Steelers will need to make at least one additional personnel move as Le’Veon Bell is not officially part of their 53 man roster.

Tight End Health Not a Concern – Yet

Thanks to a little inductive reasoning, we can also reasonably conclude that Mike Tomlin and Kevin Colbert are not concerned about the health of Vance McDonald and Xavier Grimble or of Jesse James for that matter. McDonald has been injured all summer, and Xavier Grimble has had wrist/thumb surgery calling into question just how stable tight end would be for the Steelers in 2018.

The fact that the Steelers cut Bucky Hodges and Pharoah McKever would seem to indicate that they’re not concerned about the health of their tight ends.