We’re only two games into the 2018 season, but it’s clear that the Pittsburgh Steelers have problems. Lots of them, far too many problems to cover in a Saturday blog post.

Years ago, site writer Gustavo Vallegos suggested the Steelers practice tackling technique with the Pumas. His idea is a good one, but I don’t see Mike Tomlin flying Nicholas Sanchez in to the South Side for a mini-tackling technique clinic this fall.

No, this suggestion far simpler, doesn’t involve any major tactical or strategic shift for either the coaches or the front office and would come directly from the Steelers locker room:

The idea is hardly original. But most suggestions that fans circulate, ironically on social media, tend to read like this:

Given Antonio Brown’s antics this year, and Martavis Bryant’s “I want mines” from last year, this is easy to understand. But it won’t work. Mike Tomlin doesn’t have that kind of power, nor does any other NFL head coach.

But during the 2011 Rugby World Cup the players from the Argentina Pumas made a pact – during the tournament they would all stop using Facebook and Twitter. The Pumas’ previous World Cup appearance in 2007 had ended with a historic 3rd place finish, and the players didn’t want anything to distract their 2011 campaign.

A similar social media fast might work in Pittsburgh, if it came from leaders like Ben Roethlisberger, Maurkice Pouncey, Cam Heyward, Ramon Foster and Joe Haden. A total social media ban is as unlikely as it is unrealistic. 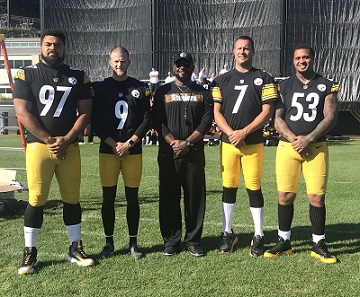 A good chunk of the Steeler locker room not only grew up with social media, but have had social media apps on their cellphones since they were adolescents.

Simply wishing social media away won’t work. But veteran leaders in the Steelers locker room can perhaps put some limits on its use and establish a culture on tweeting taboo topics that cause distractions for rest of the locker room. This has worked for the Steelers before.

One of the meeting’s results was clear: No cellphones, no pagers at practice or in team meetings. Greg Lloyd dared teammates to defy him, promising to smash any violator’s phone.

Staying off social media isn’t going to cure all that ails Keith Butler’s defense, nor will it stop Antonio Brown from blossoming into a full-blown diva (if he’s not already there), nor will it restore David DeCastro and Marcus Gilbert back to full health.

But it can sharpen the 2018 Steelers focus on football, and that’s a shift which can only help this football team.