The Lombardi Trophy is Pittsburgh’s sole measure of success. Can the Steelers win the Super Bowl in 2018? The men in Black and Gold will begin the 2018 season Cleveland and the Steelers 2018 Super Bowl hopes largely hinge on the answers the team can provide to these four questions. 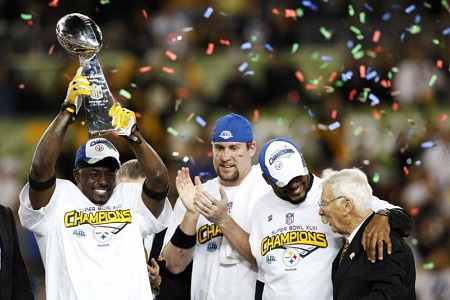 How quickly we forget. When Jim Wexell broke the news the Friday before the playoff game that Ben Roethlisberger wasn’t retiring, Steelers Nation breathed a collective sigh of relief.

Nonetheless, Wexell was breaking very good news. But which Ben Roethlisberger will the Steelers welcome back in 2018?

Bringing home a 7th Lombardi Trophy to Pittsburgh in 2018 will require the concerted efforts of all 53 men on the Steelers roster, but no one’s health and performance is more important than that of Ben Roethlisberger.

Can the Steelers Come Out Running at the Opening Bell?

As of Thursday morning, Le’Veon Bell has neither reported to the Steelers complex on the South Side, nor has he given any indication of if or when he will, aside from an oblique comment from his agent about something “extraordinary” happening.

Some wishes come true. As I pointed out previously, you can win the Super Bowl using Running Back by Committee, but the Steelers must first find a way to keep their top two running backs healthy for an entire season, something they’ve struggled to do in the Mike Tomlin era.

Le’Veon Bell, for all his antics, for all the questions about his self life and any alarm sparked by his production decline in 2017, remains a championship caliber talent until proven otherwise.

In his absence, the Steelers will find out, for better and for worse, what they have in James Conner, Stevan Ridley and Jaylen Samuels. Antonio Brown and JuJu Smith-Schuster give the Steelers air game legitimate weapons, but the Steelers can’t win through the air alone.

Have the Steelers Shored Up the Center of Their Defense?

Images of the Steelers defense flashing shut down ability in early 2017 have been replaced by those of a sieve that allowed the Jaguars to score 45 points at Heinz Field. Eight months later, Joe Haden has a full year in the Steelers offense, Artie Burns has logged a strong summer and Stephon Tuitt has returned to full health.

All positive developments, but do they address the deficiencies that the Jaguars exposed and exploited? In late February Pittsburgh 247 publisher Jim Wexell offered some insight:

It was 14 years and almost two months ago that Tim Lewis, on his way out of town as defensive coordinator, gave me the tip that I haven’t forgotten.
Lewis told me the Steelers’ defense — which fundamentally hasn’t changed since — will always be built around the nose tackle, the inside linebacker and the strong safety. And he felt those positions, because they were in the middle of the action, had to be replaced more frequently than the others and therefore should always be monitored.

As Wexell points out, Casey Hampton, James Farrior and Troy Polamalu, three great players by any measure, led the Steelers to victories in Super Bowl XL and Super Bowl XLIII. Joel Steed, Levon Kirkland and Carnell Lake were three good players who helped sustain the Steelers of the ‘90’s as contenders.

Against Jacksonville, without Shazier, it wasn’t so much a matter of the rest of the Steelers defense failing to be great or event good, but rather it looked like a backup JV defense competing against a championship Varsity offense.

The Steelers have tried to strengthen the middle of their defense by shifting Sean Davis from strong to free safety and by adding safeties Morgan Burnett, Terrell Edmunds and inside linebacker Jon Bostic.

Did the Steelers do enough? The Steelers 2018 Super Bowl hopes in large part depend on that answer being “Yes.”

Can Mike Tomlin Keep His Team Focused on What Is In Front of Them?

Pittsburgh’s 2017 season didn’t end so abruptly because of Mike Tomlin’s comments to Tony Dungy or because various players supplied “bulletin board material.” The Steelers lost because two turnovers essentially spotted the Jaguars 14 points and the defense was powerless to stop Jacksonville after that.

But it doesn’t mean that improved focus throughout the locker room wouldn’t have helped the Steelers compensate. Chuck Noll called it “Singleness of Purpose,” the idea that everyone on the team was focused on the same objective and they carried that focus on to everything they did.

The Steelers, as an organization, seem to be channeling their inner Emperor. Throughout the summer at St. Vincents, answers to questions about the Steelers prospects of the season, whether they came from Art Rooney II, Kevin Colbert, Mike Tomlin or one of the veteran leaders universally ended with “…but right now, our focus is on beating Cleveland.”

If you establish that type of attitude in July and sustain it through the fall, you can give yourself a chance to play in February! Go Steelers!