If there’s one positive to take away from the Steelers very disappointing 21-21 Week 1 tie with the Browns at Cleveland’s FirstEnergy Stadium on Sunday, it’s that James Conner isn’t receiving the lion’s share of the blame.

Perhaps, if he were another running back, such as the one he started in-place of–superstar Le’Veon Bell, who continues to sit out rather than sign the $14.5 million franchise tag–Conner would be more susceptible to criticism. 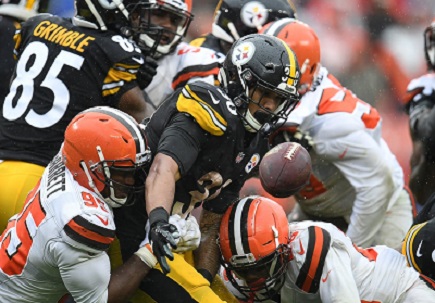 After all, when a team is up by two touchdowns and in possession of the football midway through the fourth quarter, the offense is supposed to grind the clock out and go home with a win. And when you can point to a fumble by a running back that jump-started the comeback, why wouldn’t that running back be the goat?

While it is true that James Conner’s fumble, which tarnished an otherwise awesome day in-which he tallied 192 total yards from scrimmage and two touchdowns, was the life-preserver that prevented the Browns from drowning in a game-long downpour, you can also point to some very egregious turnovers earlier in the game that, had the offense executed like the juggernaut it’s supposed to be, could have made Conner’s gaffe meaningless.

For example, how about quarterback Ben Roethlisberger, the 15-year veteran, the future Hall of Famer, the two-time Super Bowl-champion, throwing into triple-coverage and getting intercepted by rookie cornerback Denzel Ward late in the first quarter of what was then a scoreless game?

Following a 27-yard connection to receiver JuJu Smith-Schuster one play earlier, Pittsburgh had a first and 10 from the Browns’ 18-yard line and looked poised to get on the board first.

Unfortunately, Ben Roethlisberger, who has always been known as a gunslinger, wanted to make Antonio Brown his very next connection, hence the ill-advised throw into triple-coverage.

Moving on to late in the second quarter. The Steelers had a 7-0 lead and were on the positive side of the 50-yard line in-search of an even bigger lead before halftime.

Following an incomplete pass, Pittsburgh faced a second and 10 from the Cleveland 37-yard line. During his usual pre-snap maneuverings, Roethlisberger motioned for Smith-Schuster and tight end Jesse James to switch positions. Roethlisberger quickly found a wide-open James with a short pass that went right through his hands and into Ward’s for his second interception of the half.

For the day, the Steelers committed six turnovers, with James Conner’s being the only one that led to points by Cleveland. Again, that makes him an easy target to blame.

But as some critics liked to remind us last December when the Steelers were denied a touchdown against the Patriots thanks to a replay reversal, there are many plays throughout the course of a game that help to shape the outcome.

James Conner had a hand in the Steelers losing a two-touchdown lead, but Ben Roethlisberger and Jesse James also made sure Pittsburgh’s fourth quarter advantage wasn’t much, much bigger.