For much of Steelers Nation the move comes 5 years late, as Steelers cut Landry Jones as the team moved to reduce its roster down to 53 ahead of the NFL deadline. The Steelers of course drafted Landry Jones in the 4th round of the 2013 NFL Draft after watching both Byron Leftwich and Charlie Batch lose the footrace with father time.

As previously mentioned, preseason is not available here in Buenos Aires without NFL Game Pass, but Going Deep with the Steelers scribe Ivan Cole, the antithesis of a knee jerk fan if there ever was one, assured me Landry looked lost in preseason during both 2013 and 2014. The Steelers made a serious run at replacing during the summer of 2015, but Jones rose to the moment. 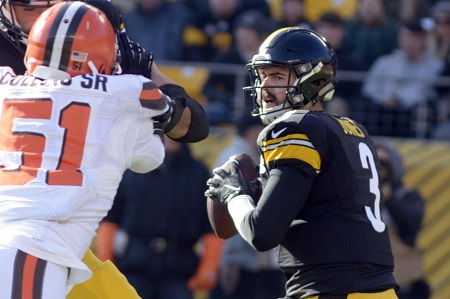 Indeed, it quickly became clear that Landry Jones, and not Mike Vick, was the better backup quarterback, as Jones closed victories against Arizona and Oakland.

But the Steelers have been investing in their future at quarterback, having drafted Joshua Dobbs in the 2017 NFL Draft and Mason Rudolph in the 2018 NFL Draft.

The Steelers were undoubtedly unable to trade Landry Jones, but the backup quarterback’s phone will ring soon.

Careful What You Wish For….

Despite improved play from Landry Jones during his limited opportunities (OK, the 2015 deer in the headlights playoff appearance against Cincinnati notwithstanding) a large and vocal segment of the fan base has advocated moving on from Landry Jones.

It says here that Randy Fichtner, Mike Tomlin and Kevin Colbert know a lot more about what qualifies a player to be ready as a backup NFL quarterback than I do. But I also know that the Pittsburgh Steelers policy dating back to Bill Cowher’s arrival has been to staff a veteran backup quarterback.

Mike Tomlin and Kevin Colbert have never let fear drive their personnel decisions out of fear, and they’re not starting to do so now. Good for them.

Landry Jones might have been lost as he looked to be in 2013 and 2014, but by 2015 he showed he belonged, and by 2016 he performance merited respect. Landry Jones might never be a great or even good starting caliber NFL quarterback, but he’s proven himself to be a quality backup.

And to those who say “good riddance” at Landry’s departure, I can’t help but remember the following Darth Vader quote from the original Star Wars (sorry, its Star Wars, not A New Hope):

If you’re not up on your Star Wars history, things don’t quite work out the esteemed Lord of Sith expected.

There’s no substitute for experience in the NFL. Should Ben Roethlisberger go down with injury early in the season much as Tommy Maddox did in 2004, its possible that Mason Rudolph could play like Ben Roethlisberger did as a rookie.

Following the Steelers preseason win over the Carolina Panthers, Mike Tomlin claimed Pittsburgh had “4 above the line quarterbacks.” The Steelers decision to cut Landry Jones shows that Mike Tomlin and Kevin Colbert are ready to put their money where their mouth is.