James Harrison‘s advice to Le’Veon Bell certainly is generating a lot of sound a fury. But as the estranged ex-Steelers linebacker struts and frets is 15 minutes of Sport TV talk show fame the his words will signify nothing more than the tarnishing of his own legend.

Well, actually, that’s not true, because thanks to social media we know that Bell is living the good life jet skiing and strip club hopping in south Florida. But Le’Veon Bell is not with the Pittsburgh Steelers, which is where both he and his agent said he would be, until he wasn’t. 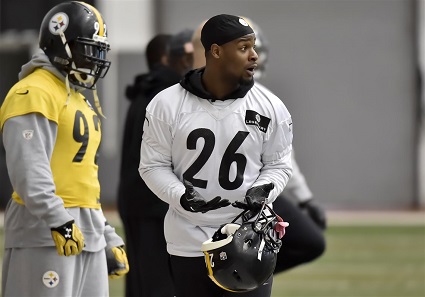 The question now is will Le’Veon Bell show up, or will he sit out the entire year?

James Harrison has some friendly advice for his former teammate on what he should do. You’ve heard it already, but just to keep it fresh in your memory, here’s the full quote:

If I’m Le’Veon, I’m coming back Nov. 13, and going to go in there, I’m going to get my credit, the season that I need to get, and I’m going to do the best I can to get out of that season healthy,” Harrison said. ”For me, I’d give you everything in practice. You would see, the cameras would see, that I am fine. I am healthy. But come Saturday? Something ain’t right. I can’t play on Sunday. Because if I go out here and I mess something up. I’m losing a lot of money.

Niccolo Machiavelli would approve. Scholars continue to debate the true meaning of the Florentine philosopher’s seminal work The Prince, but the 16th century’s version of a life coach never shied from encouraging would-be statesman to put their self-interest first.

In telling Le’Veon Bell to sign a contract and then mail it in, James Harrison offers the same advice.

There’s a backstory here of course. There always is. Things did not end well between James Harrison and the Steelers. The Steelers resigned Harrison in the 2017 off season, and then cut him before Christmas.

Who is at fault for what happened in between comes down to who you believe. While I’ve always tended to agree with the Steelers side of the story, Art Rooney II admits that there was “blame on both sides.”

James Harrison begs to differ, it would seem. First James Harrison signed with the Patriots and took selfies with Tom Brady. Then James Harrison has very publicly question Mike Tomlin’s approach to discipline.

James Harrison was free to sign with anyone and when you’re 39 years old, chances to latch on to Super Bowl contenders – in late December no less — don’t come often.

While Harrison’s comments about Mike Tomlin ring petty from a player who did all the things that Bill Belichick supposedly does not tolerate, Belichick almost certainly is more of a disciplinarian than Mike Tomlin.

But advising another player to sign a contract in good faith and then mail it in falls way below the belt.
What kind of message is Harrison sending to his kids?

“Keep your word. Always do your very best. Work hard. Unless of course, you get ticked that Todd Gurley got the kind of contract that you and Adisa Bakari didn’t think he would get. Then it is OK to sign contracts and make commitments you never intend to keep.”

Get that straight boys and girls?

And please, spare me the argument that the Steelers did the same thing. T.J. Watt was a rookie sensation who needed to stay on the field, and if Harrison really wanted to push for playing time, sleeping through meetings was not the way to do it.

James Harrison became a dominating NFL linebacker by the sweat of his brow. No one gave James Harrison anything. He went out and earned it. And that’s what made James Harrison such a popular Pittsburgh Steeler. His attitude, his work ethic and his tenaciousness embodied the values that made the Steelers and the city of Pittsburgh great.

But telling Le’Veon Bell to sign a binding contract and then simply to turn his back on his teammates suggests that James Harrison has forgotten where he came from.