The Pittsburgh Steelers would be 1-0 today if Le’Veon Bell had shown up and reported for work as expected. The reason is that, if the Steelers missed anything from Le’Veon Bell on Sunday, it was Le’Veon Bell’s ball security skills.

Yeah, yeah, I know, I know. It IS a strange thing to read from a writer who has already done the cyberspace equivalent of taking pen to paper to argue that James Conner shouldn’t be scapegoated for the Steelers 21-21 opening day tie against the Browns.

But if you read on, you’ll see that my argument isn’t any sort of hypocritical double-speak or some writer’s equivalent of buyer’s remorse, but rather simple numbers. And numbers don’t lie. 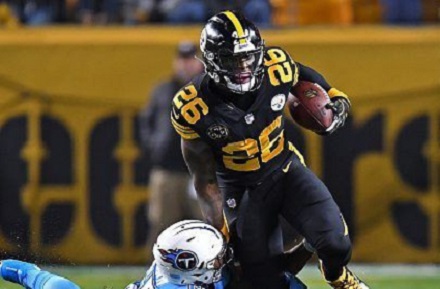 When we talk about the all-time great players, we tend to focus on highlight-worthy qualities.

For example, when you watch any film of Steelers Hall of Fame middle linebacker, Jack Lambert, it’s usually of Lambert crashing into a running back, yelling at an official or leveling a wide-receiver who made the mistake of trying to catch a pass in his area.

As it pertained to the leveling of that wide-receiver and Jack Lambert’s area, the reason No. 58 was often in position to wreak havoc was because when he dropped back into pass coverage, there were very few linebackers of his era (or any era) who had the athleticism and football-awareness to get the depth necessary to put himself in the position to get those kill-shots he was so famous for.

Whether it’s his patience right before choosing a hole on running plays or his aptitude for being an extremely skilled receiver out of the backfield, few can match Le’Veon Bell’s abilities. Including ones we don’t often focus on…

Like the rest of us, Le’Veon Bell is fully-aware of his greatness which, unfortunately, has led to the current hold out with the Steelers–his training camp absence  has spilled-over into the regular season.

As a consequence, second-year running back James Conner was moved up the depth chart and started the Steelers’ Week 1 contest against the Browns last Sunday at FirstEnergy Stadium in Cleveland, Ohio.

Sadly, midway through the fourth quarter, and with Pittsburgh holding what seemed to be a safe 21-7 lead, James Conner ignited a Browns’ comeback by fumbling at the Steelers’ 17-yard line, a play that led to a one-yard touchdown. 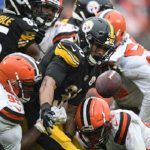 The Browns ultimately tied the game at 21, a score that held all the way through to the end of overtime. As I wrote on this very site earlier in the week, while James Conner’s gaffe was critical, there were other  Steeler transgressions (such as Ben Roethlisberger’s in ability to sync with Antonio Brown and Big Ben’s 5 turnovers) that contributed greatly to the Week 1 sports equivalent to kissing your sister.

Of all of Le’Veon Bell’s awesome attributes,  perhaps the most underrated is his ability to hold onto the football, this despite  having an insane workload through five seasons in the NFL.

“So What????” you scream, “Running Backs are supposed to hold on to the damn ball in the first place! And now you want to pat this greedy brat on the head for just doing the bare minimum expected of any NFL running back?”

Yeah, I get it. Simply holding on to the ball does seem like a rather mundane accomplishment to praise. So let’s look at how Le’Veon Bell’s fumble percentage compares to that of other great Steelers running backs: 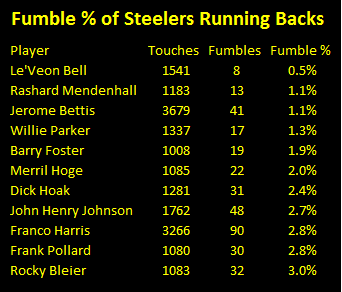 Looks a little more impressive now, doesn’t it? Not does Le’Veon Bell lead the pack, he leads it by a mile.

Franco Harris, Jerome Bettis and John Henry Johnson, the Steelers 3 Hall of Fame running backs, all have fumble percentages well in excess of Bell’s. Rashard Mendenhall and Willie Parker fumbled the ball 1.1% and 1.3% of the time, or more than twice as often as Bell.

Frank Pollard and Rocky Bleier fumbled the ball 2.8% and 3% of the time, or nearly 6 times as often as Le’Veon Bell.

In fairness, seven of Le’Veon Bell’s fumbles came over the previous two seasons, which clocks him in at 0.9%  but since we’re being fair, he also had a combined 742 touches. And that’s still far below the 2% fumble rate which is the average of the subgroup ahead.

Does this mean James Conner doesn’t take care of the football? Not at all. It just means he hasn’t logged enough reps to earn such a reputation at this point of his career.

People talk about discipline in football and think they can point to certain behaviors away from the field as a sign that a player lacks it — Le’Veon Bell often frustrates Steeler fans with some of his “moves” away from the gridiron.

But what requires more discipline and attention to detail than being able to hold onto the football when multiple defenders are trying to wrest it from you 35 times a game?

Le’Veon Bell does many things well on the football field, and if he was in the lineup last Sunday, chances are, the Steelers would be 1-0.