Fans arguing for running back by committee shift for the Steelers offense might get their wish as Le’Veon Bell no showed at Steelers practice. Steelers General Manager Kevin Colbert issued the following statement:

We are disappointed Le’Veon Bell has not signed his franchise tender and rejoined his teammates. Coach Tomlin and the coaching staff will continue to focus on preparing the players on our roster for our regular season opener on Sunday against the Cleveland Browns.

Colbert’s statement is a long way from “Franco who?” but it also underlines that the Steelers really have form of compelling Bell to rejoin the team. Per Jeremy Fowler’s report on ESPN, neither the Steelers nor people close to Bell is surmised by the All Pro running back’s no show, and given Bell’s erratic behavior this off season perhaps they shouldn’t be. 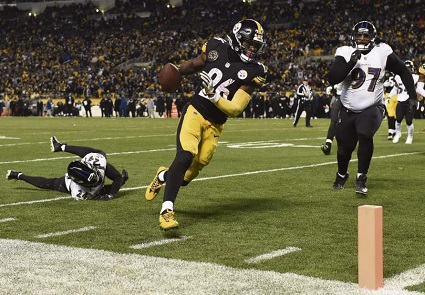 Time to Panic? No. Time to Get Pissed? Yes.

Le’Veon Bell has broken rushing records which neither Hall of Famers Franco Harris, Jerome Bettis, and John Henry Johnson nor Super Bowl record setter Willie Parker could touch. Among NFL players with 60 or more games, Le’Veon Bell leads them all in total yards from scrimmage.

And today’s no-show at practice reveals why. While Bell had threatened to retire if the Steelers hit him with the franchise tag again and hinted at holding out all season, he later clarified that he intended to report the regular season. And when the Bell and the Steelers failed to reach a long-term deal, Bell issued the following statement:

So I guess this was all BS, huh @LeVeonBell? #Steelers pic.twitter.com/Gx4yZtRK7i

Steel City Blitz’s Ben Anderson is speaking for a large swath of Steelers Nation, including many of those who scoffed at the idea of running back by committee.

Let’s clarify one thing. Unlike Hines Ward in 2005, Barry Foster in 1993 or Mike Merriweather in 1988, Le’Veon Bell has absolutely zero contractual or legal obligation to play for the Steelers. He’s not under contract, and has the option of giving up the 14.5 million franchise tender in exchange for sitting out the year. Some, such as James Harrison have advised Bell to do just that.

So Steelers fans have every right to be upset with Le’Veon Bell. When an athlete makes it clear he’s not giving any hometown discounts and that he’s firmly focused on the bottom line, such mercenary attitudes can rub us the wrong way, but at least the athletes are being honest.

When the talk a good game a la Neil O’Donnell about money not being their sole motivating factor and then behave differently, that’s something else. With that said, there is no reason for fans to panic at this point at least.

Yes, Le’Veon Bell’s value to the Steelers offense is undeniable:

James Conners, Stevan Ridley, and Jaylen Samuels showed a lot of promise, but expecting the trio to make that up simply isn’t realistic. And with Vance McDonald‘s status unknown, there’s no obvious replacement as a check down option for Ben Roethlisberger when Antonio Brown, JuJu Smith-Schuster and James Washington are covered downfield.

But given Le’Veon Bell’s erratic behavior, he could merely be intent on enjoying a full Labor Day weekend before reporting or perhaps he’s planning on reporting in before the Browns game soon enough that he can collect his $852,000 game check but late enough that Mike Tomlin will not play him.

To get to that point, Bell will have to forfeit nine million dollars in change. And for all antics thus far, Le’Veon Bell hasn’t shown himself as someone willing to leave that much money on the table. Yet.

2 thoughts on “Le’Veon Bell No Shows @ Steelers Practice. Time to Get Pissed, But Not to Panic”