There’s no sugar coating this: Pittsburgh has problems. The Steelers 37-42 opening day loss to the Kansas City Chiefs included a multitude of milestones, none of them good:

But those milestones, however unpleasant, tell us more about the Pittsburgh’s past than its present. The Kansas City Chiefs victory a Heinz Field exposed several fundamental weaknesses of the 2018 Steelers, weaknesses which Mike Tomlin will be hard pressed to paper over. 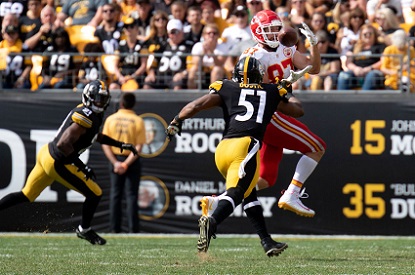 One of the Worst Quarters of the Tomlin Era

The simple take away following the loss to the Chiefs is to point to the offense’s 37 points and lay the blame on the shoulders of Steelers defense. That would be a mistake, however.

The Steelers first two drives netted negative yardage, as a hurried Ben Roethlisberger’s passes flew high and off target. By the time the Steelers offense got out of the red, the Kansas City Chiefs had already scored two touchdowns, and the only answer the Steelers offense could muster was a missed Chris Boswell field goal.

With feeding the ball to James Conner a non-option given the score, and with Ben Roethlisberger unable to make anything more than piecemeal connections with Antonio Brown, Ryan Switzer Jesse James and JuJu Smith-Schuster stepped up.

While Art Rooney II’s words may hold some truth, if you’re MO for winning games is to score 50 points a game,  then your offense cannot take a quarter to warm up, nor can it sputter in critical moments late in the game.

Of course the Steelers goal never was to simply make every game a shootout and count on the offense to prevail. During the 2018 off season the Steelers went through a whole sale house cleaning of their secondary and made moves to bolster its linebacking corps.

One of the key new pieces the Steelers added in the off season was Jon Bostic. The scouting report on Jon Bostic was that he was fairly strong against the run, but struggled in coverage. And against the Chiefs, Bostic defended the run well enough, but looked clueless in coverage as Travis Kelce burned the Steelers down the middle all afternoon long.

The Steelers doubtlessly missed Joe Haden, but on one in the rest of the secondary did anything to suggest things would be different had Haden played.

Played Out in Pittsburgh?

Furious fans took to social media to draw comparisons to the Jacksonville playoff debacle. That’s understandable, but perhaps the 2002 season opener against the Patriots provides a more accurate comparison.

Following the same script that Tom Brady and Bill Belichick used 16 years ago, Andy Reid and Patrick Maholmes essentially abandoned the run in the second half.

That 2002 Steelers team started 1-3, yet clawed its way to a division championship. Only a bogus roughing the kicker call kept Pittsburgh from an AFC Championship appearance. But that rebound required Bill Cowher to spark the team with a quarterback change, and the Steelers pass defense remained a liability all season long.

Nor does the Steelers head coach have any equivalent, dramatic personnel change to make on defense. Which means that Mike Tomlin, Keith Butler, Tom Bradley, Karl Dunbar, Jerry Olsavsky and Joey Porter must find a way to coax better performance out of their defense

Otherwise, the Steelers will continue to fall hard this autumn.

One thought on “Played Out in Pittsburgh? Chiefs Defeat Steelers 42-37 at Heinz Field in 2018 Home Opener”