Taken from the gradebook of a teacher whose dismayed that his star pupil can’t seem to perform except when sitting at his own desk, here is the Pittsburgh Steelers Report Card for the Opening Day Tie against the Browns. 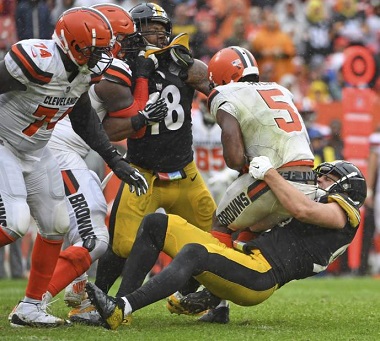 Quarterback
Once again Mike Tomlin decided to rest Ben Roethlisberger for the bulk of preseason, and once again Roethlisberger was road rusty in Cleveland. After a rough, 3 interception start, Roethlisberger appeared to settle down in the 3rd quarter, but then failed to move the offense at critical moments in the 4th. The Steelers committed 6 turnovers against the Browns, and Roethlisberger accounted for 5 of those. Grade: F

Running Backs
Le’Veon Who? Ok, it is too early to say that, but James Conners starting NFL debut was a smash success. James Conner ran with the authority of a starting NFL running back, scoring two touchdowns, catching 5 passes and rushing for 135 yards. However, Conner’s fumble was quite costly letting Cleveland back in the game, which brings his grade down significantly. Grade: B-

Tight Ends
Steelers coaches might be intent on replacing Jesse James, but Jesse James continues to respond when his number is called, catching 3 passes on 5 targets including a crucial compleition late in the game. And injured Xavier Grimble started but did not have a pass thrown his way. The run blocking was exceptional against the Browns, and the tight ends helped make that happen. Grade: B

Wide Receivers
JuJu Smith-Schuster helped jump start the Steelers 2nd half rally with a 67 yard pass return on a day where he caught 5 of the 8 balls thrown his way. However, late in the afternoon, Smith-Schuster disappeared. Antonio Brown came down with a phenomenal touchdown pass in double coverage. Justin Hunter had 1 catch of 5 and has yet to prove he can perform outside of practice or preseason. James Washington didn’t get a target, and Ryan Switzer was 0 for one, although he did have one carry for 8 yards. Grade: C+

Offensive Line
On the positive side the Steelers offensive line provided road-grading quality blocking to open holes for James Conner in the running game. However, the unit’s pass protection left a lot to be desired. The Browns sacked Ben Roethlisberger 4 times, two of which were strip sacks and another could have easily been a strip sack. This doesn’t let the signal caller off the hook, but the line must protect Ben Roethlisberger better. Grade: C-

Defensive Line
Cam Heyward again reverted to 1 man wrecking crew mode, leading the Steelers defensive line with 1 tackles, a sack, tackle for a loss and a QB hit. Stephon Tuitt had 4 tackles, while Javon Hargrave two tackles. The Steelers defense did a decent job of containing the Cleveland running game. Grade: B

Linebackers
If T.J. Watt’s performance against the Browns is any indication of the 2nd year leap he is posied to make watch out. Watt was unblockable, sacking Tyrod Taylor 4 times, hitting him 4 more times, and making him 5 and half tackles behind the line of scrimmage. Per ESPN”s count, Bud Dupree had 1 sack as did Jon Bostic who also had 2.5 tackles for losses. Vince Williams led the team in tackles. Compared to the last time the Steelers took the field, the Steelers linebackers were fare improved. However, Tyrod Taylor’s 77 yards rushing hints that the Steelers linebacking corps is still missing Ryan Shazier’s athleticism. Grade: B

Secondary
The Steelers remade their secondary this off season and the results were generally positive. Joe Haden was a force in coverage, breaking up at least one touchdown pass. Mike Hilton stepped up to break up a couple of passes, as did Terrell Edmunds, with Edmunds coming up on a key 3rd down. Cam Sutton got beaten on a touchdown pass, but he was supposed to have help from Sean Davis. He atoned for it with an interception that forced OT. Artie Burns committed a costly penalty that helped set up a Cleveland score. At the end of the game, Tyrod Taylor literally had no place to throw. Grade: B

Special Teams
Jordan Berry, who had a mediocre at best preseason, played a good game boming off punts when the Steelers needed him to. Ryan Switzer, while not breaking one, showed himself as a kick returner who had the potential to make something happen, a rarity in Pittsburgh. And the Steelers special teams partially blocked a punt and blocked a field goal to save the tie.

All positives. The big negative of course is the high snap and missed Chris Boswell kick in overtime that could have won it. That brings the unit’s grade down. Grade: B-

Coaching
Mike Tomlin took a lot of grief from the fans immediately after the game, which is understandable. While a tie is better than a loss, the “W” the Steelers were counting on could easily come back to haunt them with it comes to tie breaker time.

A defense that must compensate for 6 offensive turnovers is starting with an incredible handicap. The Steelers defense pressured the quarterback, limited Cleveland’s running game and didn’t allow a pass play over 40 yards – although Cleveland hit two for 38 and 39.

On the offensive side of the ball, it was Randy Fichtner’s first game as a signal caller, and some of the same Todd Haley haters were already criticizing him for becoming too conservative in the 4th quarter, arguing “Haley would have kept his foot on the gas.” The fact is that the Steelers offense looked tentative during the 4th quarter and overtime after a strong third quarter.

Nonetheless, for the second straight year Ben Roethlisberger looked rusty in the opener, and the Home Ben vs. Road Ben issue surfaced again. Neither of these tendencies might be considered Mike Tomlin’s “fault” but both were foreseeable and neither was mitigated. Grade: C-

Unsung Hero
The record will forever reflect that James Conner’s first start was a success. But that didn’t happen in a vacuum. ON play after play, Roosevelt Nix was plowing would be Cleveland tacklers out of plays. Nix also helped partially block the punt in overtime, and for that Roosevelt Nix wins the Unsung Hero Award for the tie against Cleveland.