The Pittsburgh Steelers Fan Club of Buenos Aires started as a joke. It was 2001. Ben Roethlisberger was a freshman at Miami, Ohio. Rookie Kendrell Bell was the toast of St. Vincents, an inside linebacker who drew as many comparisons to Jack Lambert as he did to Levon Kirkland or Hardy Nickerson. Jerome Bettis was ramping up for what would be his final season as a full-time starter.

And there, in a little cement office perched on the terrace of a house on Jose Marti situated between Jose Bonifacio and Juan Alberti in the middle class porteño neighborhood of Flores, an ambitious US expat who’d been living in Buenos Aires since March hung his Pittsburgh Steelers flag out on the first day of training camp.

Months later, when that same expat got to see his first game of the season, the Steelers-Titans Monday Night game at the end of October, he wrote an email summary of the game and declared himself as “President of the Pittsburgh Steelers Fan Club of Buenos Aires.”

While some Argentines were curious about the NFL, there was a reason why ESPN showed the Sunday and Monday Night Games on tape delay – no one watched them.

Yes, there were other Steelers fans in Buenos Aires, including one Argentine Dr. living north of the city. A Dr. who understood what the names “Greg Lloyd” and “Carnell Lake” meant. A Dr. wise enough to offer nuanced opinions of Kordell Stewart when queried.

Yet, even if the internet was a fixture of Argentine daily life in 2001, Google remained in its infancy and social media was yet to be born.

That was 2001, this is 2018, and for the 2nd straight year the Pittsburgh Steelers Fan Club of Buenos Aires participated in the #SteelersWorld wide. 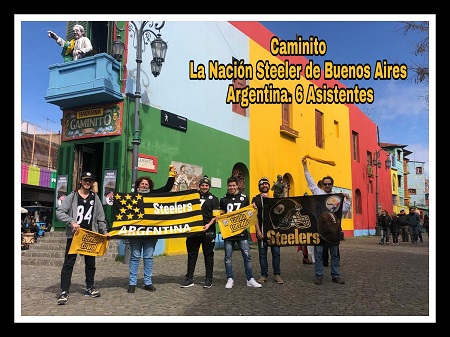 This year we opted to go to La Boca’s Caminito and whatever the Steelers faithful lacked in quantity we made up in quality. A couple of fans who were there in 2017 couldn’t make it, and we even added a new fan who got her baptism into Steelers Nation at the Steelers-Ravens game last December as the guest of none other than Franco Harris.

This year, elsewhere in Argentina, Matias Furlan and another joined in the #SteelersWorldWide movement from Tandil, which sits in to the South of the Province of Buenos Aires.

Tandil is a beautiful city and an excellent place to vacation if you’re looking to get away from the hustle and bustle of Buenos Aires. Its also the place where I vacationed in the week leading up to Super Bowl XLIII, where there wasn’t a lot of electricity generated by the coming Super Bowl.

And, in fact, the owner of the Pittsburgh Pinturas branch looked at my rather funny when I held up a copy of Jim Wexell’s Steeler Nation in front of his sign.

#SteelersWorldWide is the brainchild of a contingent of Steelers fans in Mexico, and there are legions of them. And, as the photo shows, SteelersNation in Latin America begins just south of the Rio Grande and continues all the way down to the tip of Tierra Del Fuego!

One thought on “#SteelersWorldWide 2018 Photos from Buenos Aires and Tandil, Argentina”