Take the Pittsburgh Steelers and the Cincinnati Bengals, put them together at Paul Brown Stadium and what do you get? Mayhem. Hard hits. Intense play. Battles in the trenches. Drama. Games going down to the wire. Football contests that Paul Brown himself would have appreciated. Consider a few recent milestones from the rivals’ history in this building:

The Steelers went on the road against the AFC North, division leading Cincinnati Bengals still searching for their first conference victory. The contest lived up to the series’ pedigree featuring intense action, late lead changes,  and a Steelers victory at the final gun.

But more importantly, if Mike Tomlin can keep his team focused, the impact of this latest Paul Brown Stadium milestone could be felt well beyond the October afternoon in which the Steelers authored it. 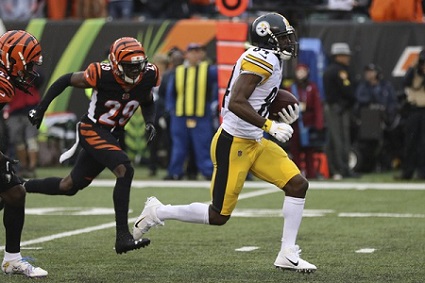 Winning in the Trenches, Getting Flanked by the Rear Guard

Pittsburgh didn’t dominate Cincinnati the way they dominated at Atlanta, but they kept the Bengals paws off of Ben Roethlisberger, and they opened holes for James Conner to explode through. While Joe Mixon did gouge the Steelers defense for a few long runs, Pittsburgh stuffed him on a number of occasions.

Despite having ample time to throw, Ben Roethlisberger and Antonio Brown still struggled to connect, with the quarterback having his best success hitting Vance McDonald and Jesse James up the middle. And when he did try to find his wide receivers, Big Ben tempted fate, as JuJu Smith-Schuster was forced to go into defensive back mode to prevent an interception at the goal line.

But thanks to the Steelers force up front, James Conner was barreling through the line for his second touchdown one play later. With 1:07 left to play, Pittsburgh seemed poised to take a 14 point lead into the locker room.

Alex Erickson not only ripped off a 47 yard return, but an Artie Burns penalty added another 5 yards to the end of it. Suddenly, instead of needing to go 80 yards for a score, the Bengals only had to go 44.

And 44 yards Andy Dalton and crew went, tying up the game at the half.

But how the Steelers got into the Red Zone was as equally important as the Bengals ability to prevent Pittsburgh from banging it in when they got there. The Steelers 2nd field goal of the 2nd half had been set up by a 48 yard pass from Ben Roethlisberger to Antonio Brown.

A bit of old time Ben-to-Brown magic that foreshadowed things to come.

Steelers Defense Does its Part

The Steelers defense has been under fire for much of the season, and a Cincinnati offense that featured Tyler Boyd and A.J. Green figured to offer another stiff test. While Pittsburgh was far from perfect, the Steelers defense did its job.

The Steelers defense broke even with the Bengals offense going 6 for 12 on third downs. And although the defense gave up the final touchdown a little too easily, that set the stage for what was to come.

“This is what legacies are made of….”

4th quarter comebacks are what make football great. Few things are more satisfying – or aggravating – than watching an offense methodically move down the field for the decisive go ahead score. The team that scores enjoys unrestrained glory. The team that fails to hang on fights utter demoralization.

Think back to Super Bowl XLIII, as Larry Fitzgerald soared to the go ahead score. Ben Roethlisberger simply put on his helmet, buckled his chin strap and was immediately in his element. And so it was, with 1:08 and 77 yards to go, Ben Roethlisberger told his teammates, “‘This is what legacies are made of for all of us. Let’s go out and take care of business.”

Then, already inside the outer limits of field goal range, with William Jackson in cover-0 without safety help, Ben Roethlisberger audibled and hit Antonio Brown on the inside up the middle:

With an Usain Bolt like bust of speed, Antonio Brown knifed through the middle of the Bengals defense for the go ahead touchdown.

Aside from being dramatic moments, the milestones cited at the beginning of this article all share something else in common:

In some cases those turning points transcended in which they occurred. Ryan Shazier’s forced fumble in the playoffs legitimized the Steelers as a Super Bowl contender. Less than a month ago, commentators argued with good cause that Shazier’s spinal contusion had closed that same Super Bowl window.

While no one is talking Super Bowl in Pittsburgh this morning, this latest win at Paul Brown Stadium certainly makes the Steelers look like legitimate AFC North contenders, and that’s not a conversation any serious person would have considered started even two weeks ago.