Taken from the grade book of a teacher impressed with his students ability to focus in the face of horrific hometown terrorist tragedy, here is the Pittsburgh Steelers Report Card for the win over the Browns. 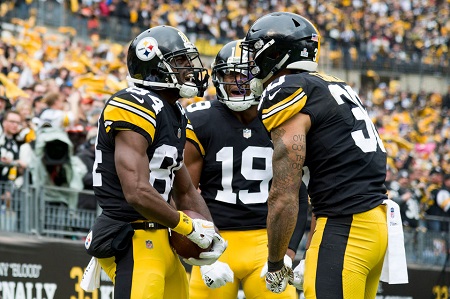 Quarterback
Ben Roethlisberger took some time to get warmed up, and threw a couple of questionable passes, but he showed poise in the pocket when the game was on the line in the 3rd quarter and never blinked. For the day Roethlisberger was 24-26-257-2-1. Grade: B+

Running Backs
James Conner continues to exceed even the most optimistic expectations riding on him going into the season. James Conner had 212 yards from scrimmage, running for 146 on the ground and 66 in the air, scoring two touchdown. Stevan Ridley caught two passes and fumbled one away, leading to Jaylen Samuels to get the garbage time duty, where he looked good. Grade: A-

Tight Ends
Vance McDonald led the group with 3 catches for 47 yards with Jesse James catching 2 passes for 9 yards. Grade: B

Wide Receivers
Antonio Brown might not have had the eye popping fantasy stats that we’re accustomed two, but he did his damage on 6 catches for 74 yards on two touchdowns. JuJu Smith-Schuster had 4 catches for 33 yards, while Justin Hunter stepped into the 3rd receiver role with 2 catches for 15 yards. Grade: B

Offensive Line
Ben Roethlisberger was sacked once and hit one other time. James Conner had holes you could drive truck through. This offensive line is protecting its quarterback on passing plays and road grading on running plays. Grade: A+

Defensive Line
Nick Chubb actually hit the Steelers for a few nice long runs, but the Steelers defense and the game situation neutralized him with 10 Cleveland rushers going down behind the line of scrimmage. Stephon Tuitt had a phenomenal day making a game-sealing sack and dominating throughout. Javon Hargrave helped bring a rusher down behind the line of scrimmage. Grade: A

Linebackers
T.J. Watt continued to dominate the Browns with 2 and a half tackles behind the line of scrimmage in addition to a sack. Bud Dupree didn’t get a sack, but harassed Baker Mayfield all day and drew a holding penalty for a safety. Jon Bostic and Vince Williams kept things quiet up the middle, while L.J. Fort and Anthony Chickillo did well in spot duty. Grade: A

Secondary
Joe Haden nabbed an interception which the Steelers turned into a touchdown, and defensed another critical pass. Mike Hilton continues to be one of the NFL’s most underrated nickel backs defensing a pass and helping bring down a running back in the backfield. Terrell Edmunds, Morgan Burnett and Sean Davis all had solid afternoons. Grade: A

Special Teams
“We screwed up.” Those are Mike Tomlin’s words, and he is right. The Steelers turned over the ball on a free kick, setting the Browns touchdown which pulled the score to within 4 in the third quarter. Had the Cleveland Browns had of the wisdom and maturity required to win football games, the Steelers would have been in big trouble.

Chris Boswell did make all 5 of his kicks, while Jordan Berry looked good punting, and Ryan Switzer had a few nice punt returns. But the free kick is inexcusable. Grade: D

Coaching
The Steelers offense started slowly, but Randy Fichtner clearly made the necessary adjustments. While the play of the men at the skill positions deserves praise, the stealer performance of the Steelers offensive line is what makes this unit tick.

On defense, Keith Butler’s unit continues to evolve. While this is a bit of a tautology, the success of the Steelers defense rises and falls with the pass rush, and the Pittsburgh clearly pressured the passer.

Historically, Mike Tomlin teams have done well coming out of the bye, but they were 1-4 in recent years following the break. On top of that, the team went on a roller coaster ride during September and October.

In other words, opportunities for distraction abounded, yet the Steelers succumb to none of them, and that reflects well on Mike Tomlin and the locker room he has built. Grade: A

Unsung Hero Award
You didn’t hear his name all day, at least until he fumbled away the faux interception. Yet he started the entire game, and when you don’t hear a cornerback’s name under those circumstances, that is usually a good thing and for that Coty Sensabaugh is the Unsung Hero of the Steelers win over the Browns.