The Steelers soared over the Atlanta Falcons in a 41 to 17 win giving Pittsburgh’s starters their first win at Heinz Field since their last second victory over the Ravens in mid-December 2017.

Instead, both teams struggled with the Falcons going 1-3 while the Steelers had registered a 1-2-1 mark in September. Instead of a Super Bowl preview, this week 5 Heinz Field matchup served as crossroads for both clubs:

Despite the score, Mike Tomlin’s Steelers didn’t exactly look like a Super Bowl team, yet way in which Pittsburgh won offers hope that this team is capable of playing winning football against good teams. 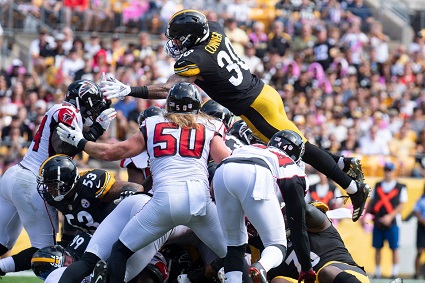 The Pittsburgh Steelers have been struggling since Ryan Shazier suffered a spinal contusion last December against the Bengals.

In 2018, an inability to convert third downs has exacerbated that struggle, creating a vicious cycle. The Steelers defense, with or without the offense turning over the ball, gives up a few quick touchdowns. Ben Roethlisberger tries to force the ball to Antonio Brown and fails. Jordan Berry punts. The defense gives up another score.

The best outcome for the Steelers in such a scenario is to transform the game into a shoot out, yet as the Jaguars and Chiefs visits to Heinz Field showed, that is not a recipe for success. The solution to breaking this cycle was simple, and James Conner summed it up in his post-game comments.

Art Rooney II once defined it as the “foundation of the franchise.” The Steelers President was talking about running the football. The Steelers hadn’t done that consistently in 2018, yet they came out of the gate rushing against the Falcons with James Conner getting the ball on 7 of 8 plays in the opening touchdown drive.

James Conner’s efforts would have counted for a lot less had Steelers defense turned around and allowed a quick score, but instead L.J. Fort dropped Matt Ryan.

The Steelers scored again with a Ben Roethlisberger to JuJu Smith-Schuster strike which was enough to put them up 13-0, and giving Pittsburgh their first multi-touchdown first quarter of the season.

The Falcons scored on a 42 yard touchdown pass, the type of which has been all to common this year. Chris Boswell missed another extra point. And perhaps worst of all the Steelers ran a very efficient two minute drill, only to see Ben Roethlisberger badly try to force the ball to Antonio Brown in the end zone, leading to an interception.

Steelers fans can be forgiven if they were dreading the other foot dropping in the second half.

Steelers Play Complete 2nd Half for the First Time All Year

In the second half of the Falcons game will the Steelers took their first foot forward towards reestablishing themselves as a team that can be counted on to win football games.

Even the win against Tampa Bay required the Steelers to hold on for dear life as the offense failed to score while the defense gave up touchdown after touchdown.

Against the Falcons, the Steelers played a complete half in all three phases of the game for the first time all season.

Credit the Atlanta Falcons. At any number of points in the second half they could have folded. They didn’t. But also credit the Steelers coaching staff. Both Randy Fichtner and Keith Butler made sure their boys kept their feet on the gas pedal and, for all their fight, the Falcons never threatened a serious comeback.

Sometimes, the Names You Don’t Hear Are the Most Important

Several Steelers authored impressive highlight reels against the Falcons. But perhaps the most impressive performances came from names you seldom heard mentioned and won’t see on ESPN game highlights.

The Steelers offensive line toiled an relative anonymity throughout the afternoon. You never heard their names because the Falcons hardly laid a glove on Ben Roethlisberger and because James Conner averaged over 5 yards a carry.

For four weeks Steelers fans have watched in anguish as wide receivers either raced through the Steelers secondary or managed to get just enough yards to keep a drive going. The Steelers secondary kept the Falcons passing attack in check the entire afternoon, limiting them to six 3rd down conversions on 14 tries, a stat that includes garbage time.

As Mike Tomlin conceded, the Steelers have a lot of work to get that “September stench” out of their noses, but against the Falcons at least, Pittsburgh offered hope that they can do just that.