Over the previous four years in-which the Steelers ultimately reached the playoffs — including three where they were AFC North champions — they encountered some rough turbulence at some point during the regular season.

As Pittsburgh prepares for the Falcons to come to town for a 1 p.m. clash at Heinz Field on this afternoon, it, again, is having a rough time of it. At 1-2-1 after four games, it appears the Steelers’ season has already hit a fork in the road.

Will they take the path many predicted before the start of the season, a path that leads them straight to the postseason for a fifth-straight year? Or will they take the direction that continues them down the road of self-destruction and the first sub-.500 record during the Mike Tomlin head coaching regime? 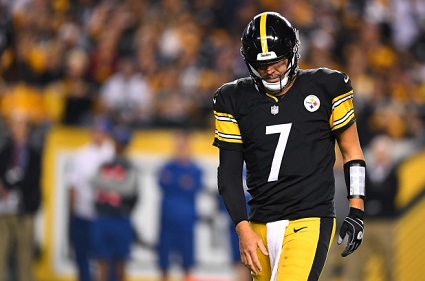 Ben Roethlisberger has had his ups and downs in ’18 thus far. Photo Credit: Getty Images, via New York Post

If I had to bet money, I’d say the Steelers will win impressively on Sunday against an equally-struggling Falcons team and, at least temporarily, take the more desirable route. But, then again, this adversity has hit everyone — coaches, players and fans – -like an unexpected round-house kick to the temple.

When the team was coming through a two-year transition phase, like in 2014, you were prepared for some turbulence. In-fact, Pittsburgh’s AFC North crown was a bit of a surprise four years ago, after the team missed the playoffs the previous two campaigns and was 3-3 after six games.

When the Steelers were hit with a rash of injuries–including the loss of quarterback Ben Roethlisberger for a combined four games in 2015 and 2016–you weren’t surprised by the struggles and even the mediocre (or worse) records late into both seasons.

Who would have thought Ben Roethlisberger and superstar receiver Antonio Brown would suddenly lose their almost magnetic connection and on-field chemistry?

Yeah, maybe the failure of disgruntled star running back Le’Veon Bell to report to the team for the first regular season game threw everyone for a loop. But with such a decorated and prideful offensive line, did anyone think the lack of a constant running game would become such a harsh reality?

Maybe you were prepared for the struggles of the defense. But were you prepared for the level of incompetence we’ve seen through four weeks, especially the two losses at Heinz Field, in-which the Steelers were down a combined 35-0 before the start of the second quarter?

This is all mostly on a lack of execution and, if we’re being honest, perhaps a little less talent than many realized the Steelers possessed.

But, as I’ve already stated, the Steelers have been in this position before in recent years, and they’ve always come out of it smelling pretty rosy.

If the Steelers are who we thought they were at the beginning of the 2018 campaign, the time to start showing it is this afternoon against the Atlanta Falcons.