After news broke that Roger Goodell fined Mike Tomlin for… telling the truth, it also came out that the NFL had fined T.J. Watt for… “Roughing the grass.” Of course, the league office isn’t calling it that.
Officially the fine is for T.J. Watt’s supposedly illegal low “hit” on Matt Ryan. 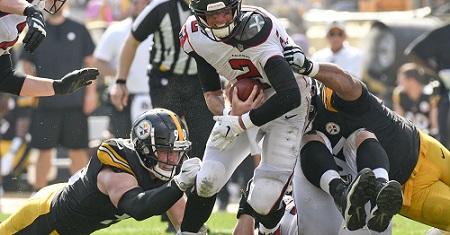 If you don’t remember the play from the Steelers 41-17 win over the Falcons, take a look for yourself:

The tweet is of course from T.J. Watt’s brother J.J. Watt. As you can see, T.J. Watt did his best to avoid contact, and barley touched Matt Ryan. An Oscar worthy performance for Ryan followed, because Ryan almost certainly did not fall on his own power.

For his troubles, T.J. Watt is now $20,054 poorer. Clearly Watt won’t have problems buying Christmas presents for his family come December, but a $20,000 dollar fine means a lot more to a player who is still on his rookie contract that it would mean to someone like Joe Haden, Ben Roethlisberger or Antonio Brown.

Mike Tomlin of course is not happy about any of this, and he too his poor for his words, however truthful the might be. But perhaps Mike Tomlin wasn’t telling the complete truth. Penalizing and issuing fines for plays like these isn’t simply a joke, it is mockery of the game itself.

Yes, it is imperative that the NFL do all it can to reduce the risk of head trauma. CTE poses an existential threat to football. Thankfully, the days when Terry Bradshaw could suffer multiple concussions, as he did against the Redskins in 1979, and joke about it with reporters after the game, are over.

In taking the NFL to task a few days ago for fining Mike Tomlin, I conceded that protecting the quarterback was important, but not if those protections altered the essence of the game. T.J. Watt’s words to reporters after learning of this fine underline just how malevolently the essence of the game is being altered.

Before getting to T.J. Watt’s words, let’s recall remarks of former Steelers linebacker, this one a Hall of Famer. And before sharing this Hall of Famers words, let’s politely suggest that if you either don’t understand or don’t agree with him then you should stop watching on Sundays and stick to Madden and Fantasy Football instead.

I believe the game is designed to reward the ones who hit the hardest. If you can’t take it, you shouldn’t play.

Contrast that with implications T.J. Watt’s response when asked if Matt Ryan took a dive:

I don’t know. If I was him I would. Why not? Fifteen yards helps your team a lot. If I’m a quarterback I’m going to sell it too. I can’t blame him for playing the game. [Emphasis added]

Sadly, here in 2018 taking World Cup soccer like dives is becoming part of “playing the game.” But it is not the way the game should be played. And that shows just how show just how grotesquely Roger Goodell is distorting football as we know it.